Well, I have been staying very busy since January. Work has kept me busy and I've also been working on projects around the house.


The most recent one I am still giddy about!

Over a 3 day time span on my Spring Break I built a garden!

I've been telling Joey since we have gotten married that I wanted a garden. He never stopped me, but other obstacles halted those plans in the past. Finally in this house, we have the yard space, a good sun/shade ratio, and we also have great soil!


To understand where I received all the dirt, will be another post. Over Christmas break we built a patio!! We had awesome family and friends lend us a hand to dig out (with shovels) a 10 x 30 space. We dug down about 7 inches. All that dirt needed to go somewhere...so we dumped it behind our shed. 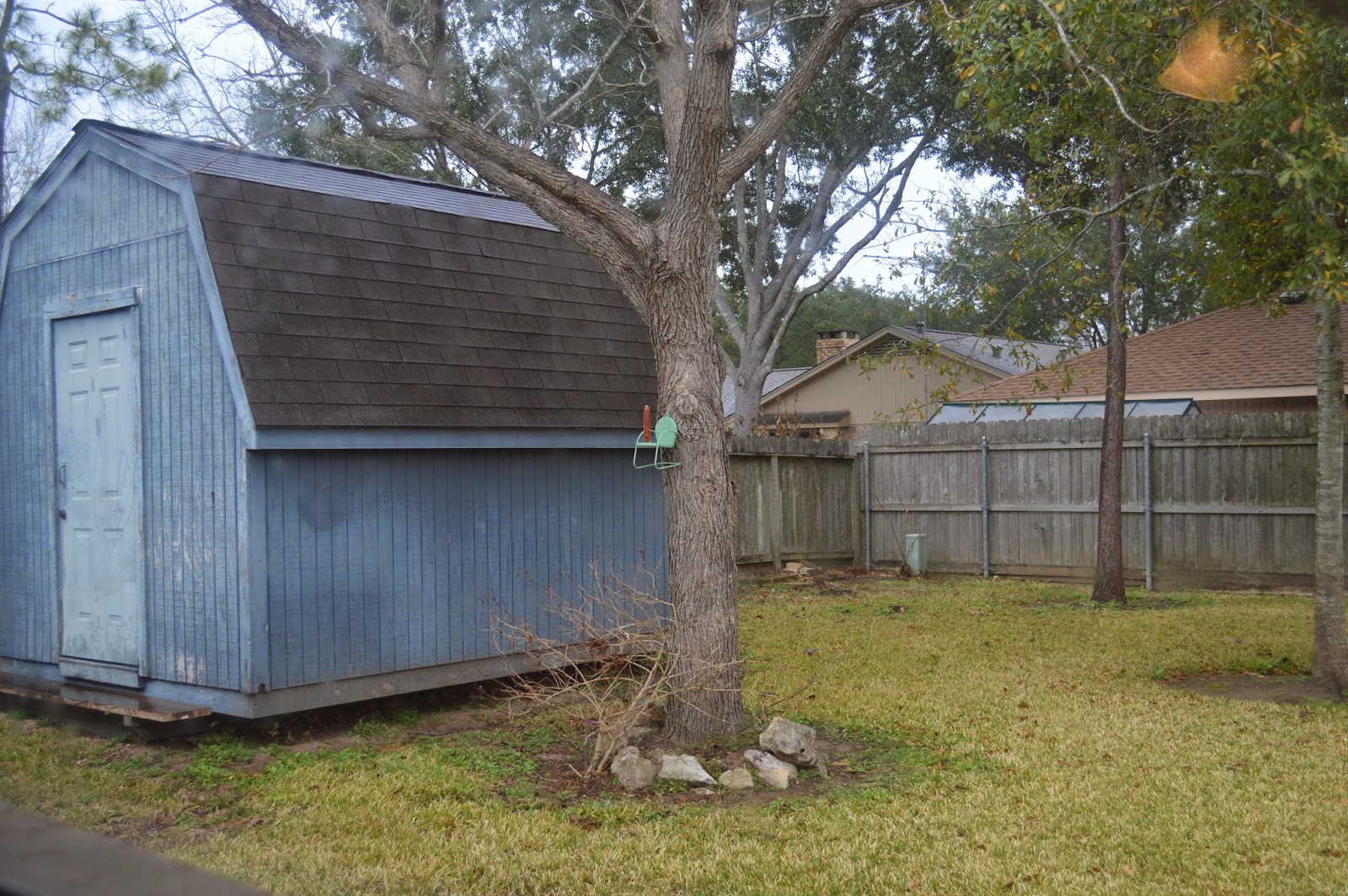 I did not take a picture of the dirt...
just picture a huge mound of dirt behind the shed

Well, as the weather started to warm up some I started thinking about my garden and what I wanted to plant. The biggest issue became what to do about all the dirt.

The awesome thing about the soil we have at this house is that it is full of earthworms and grubs, meaning it is good soil. I knew I wanted to use it in my garden.

Tuesday on my Spring Break, I started planning. It had been raining and more was to come in the forecast, so I relaxed and took that day to plan, research companion planting, and calculate how big a garden I needed/wanted. To my surprise, Wikipedia has a great companion planting guide! 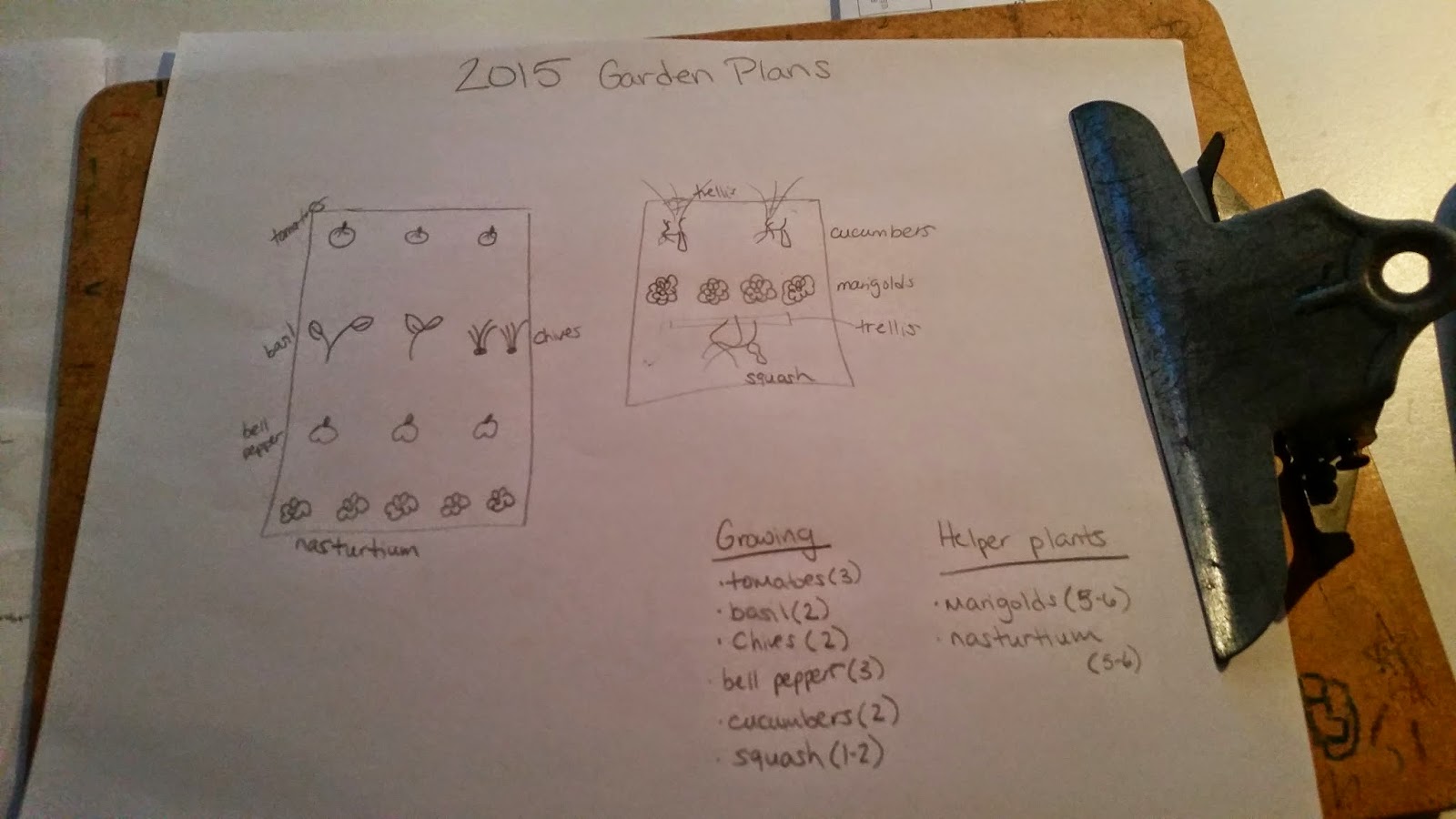 
Wednesday: I dug two trenches in the pile of dirt and moved some dirt around . 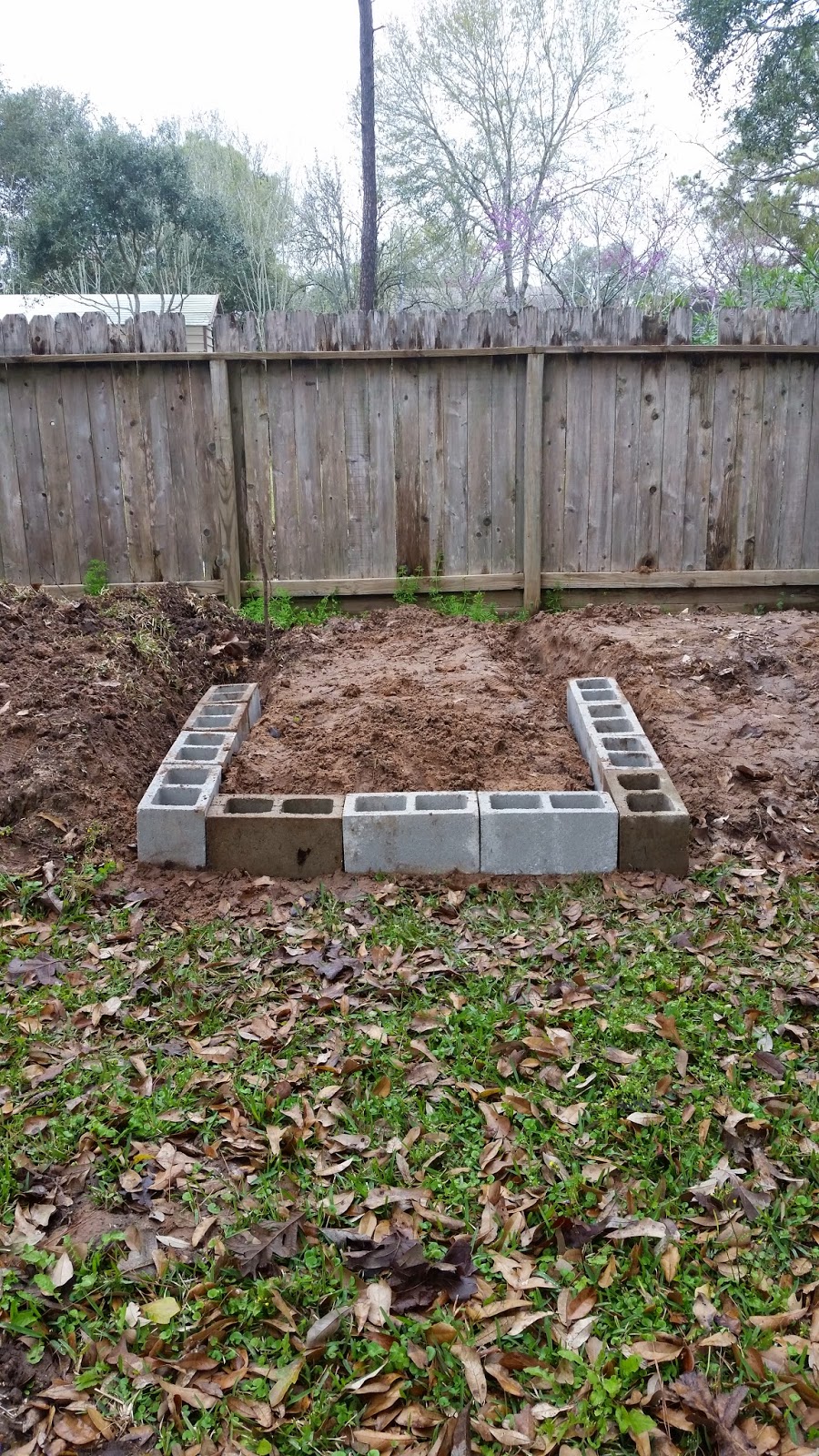 I dug out more of the trench  I ended the day with two blocks on the back wall completed and laid the front blocks of the right bed.
It was a fun drizzly/rainy day, but I was determined to get some progress in between the showers. 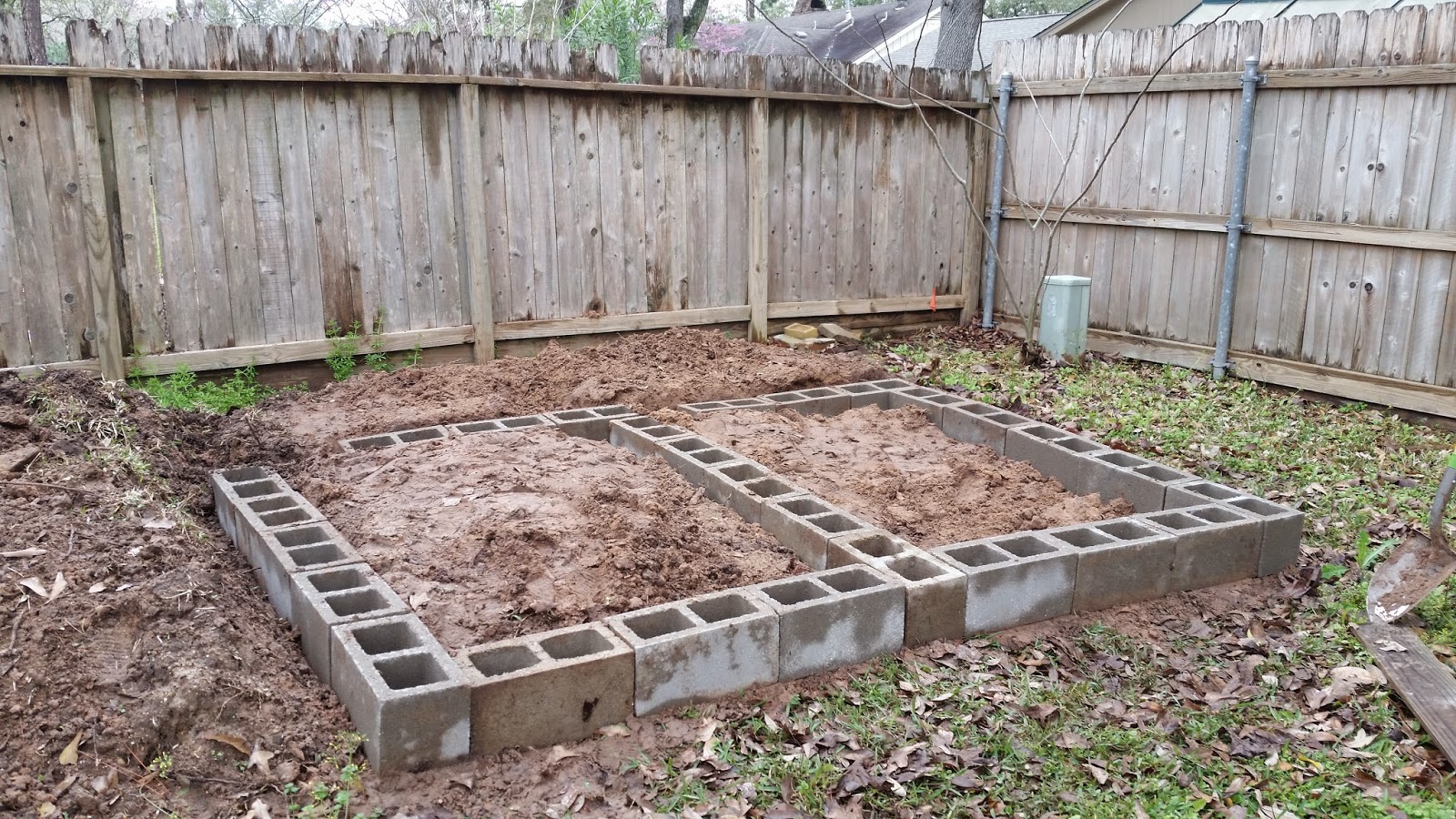 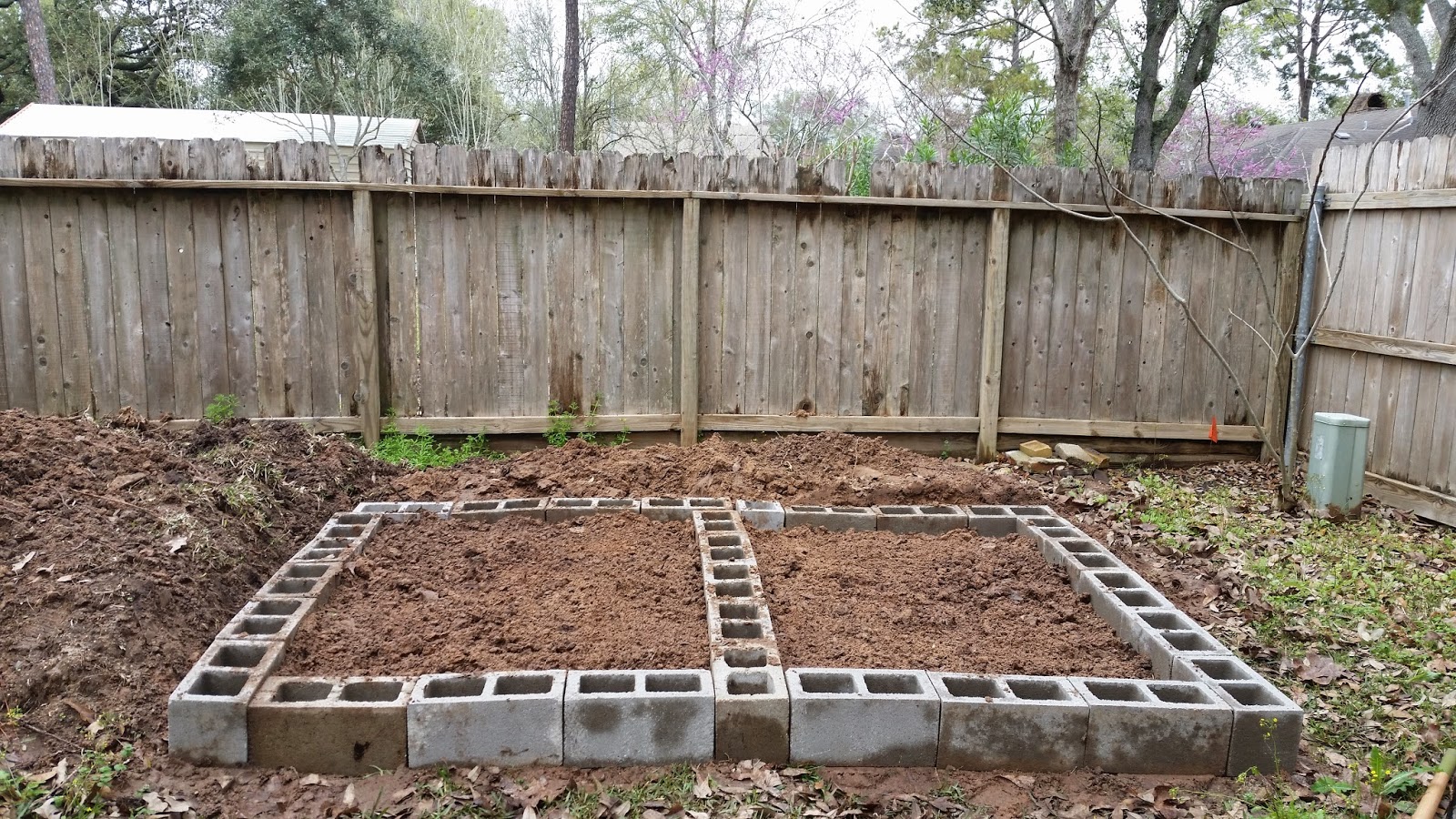 - Made a trip to Home Depot to get one more large cinder block and a half size
- Leveled the dirt
-Raked up the soil to loosen it.

I moved all of the cinder blocks myself!
Joey helped me load the first 12 in the car, but after that I unloaded those 12 and the 13 more that followed. 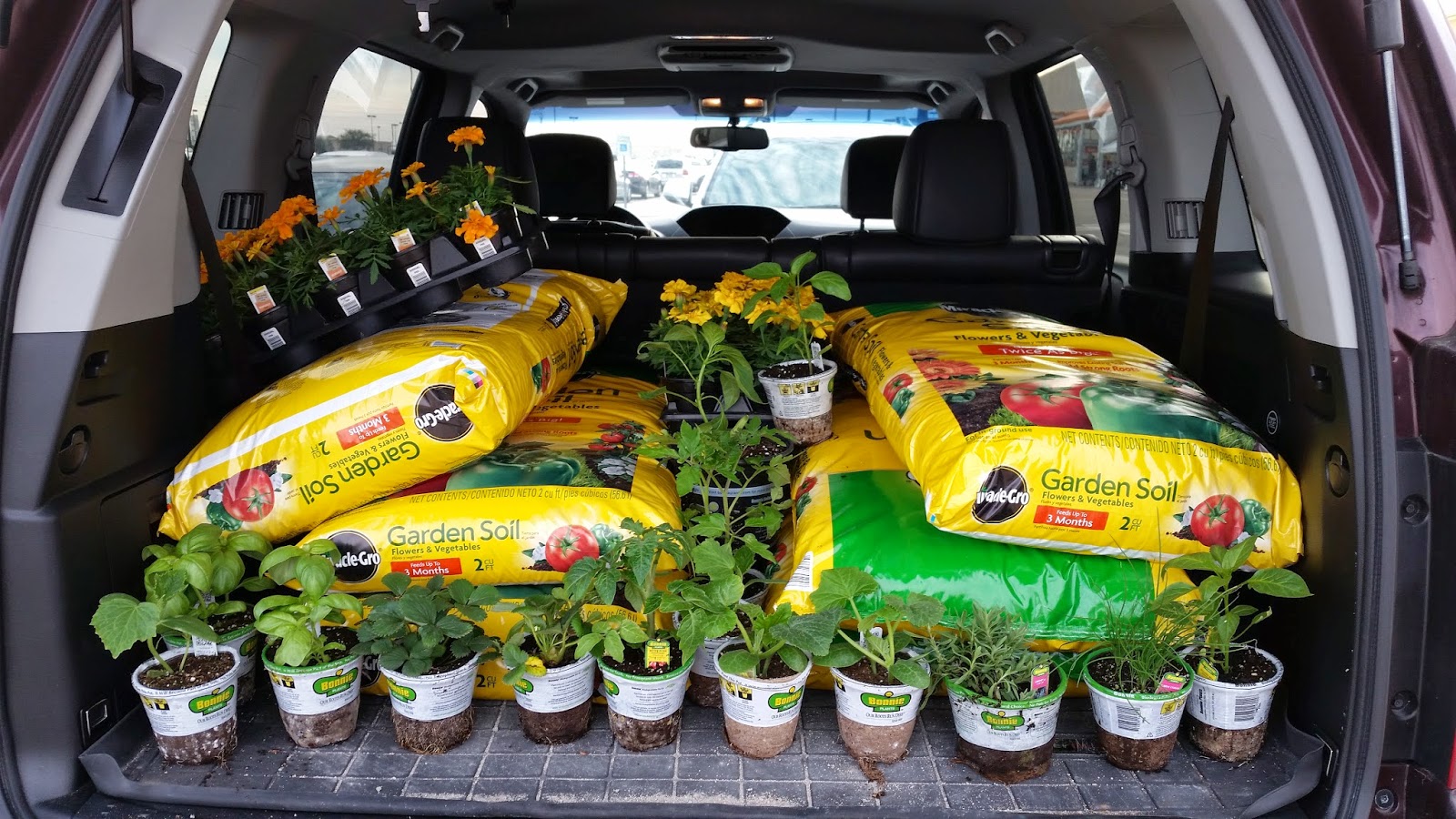 When Joey got home that day, it was off to Home Depot!! 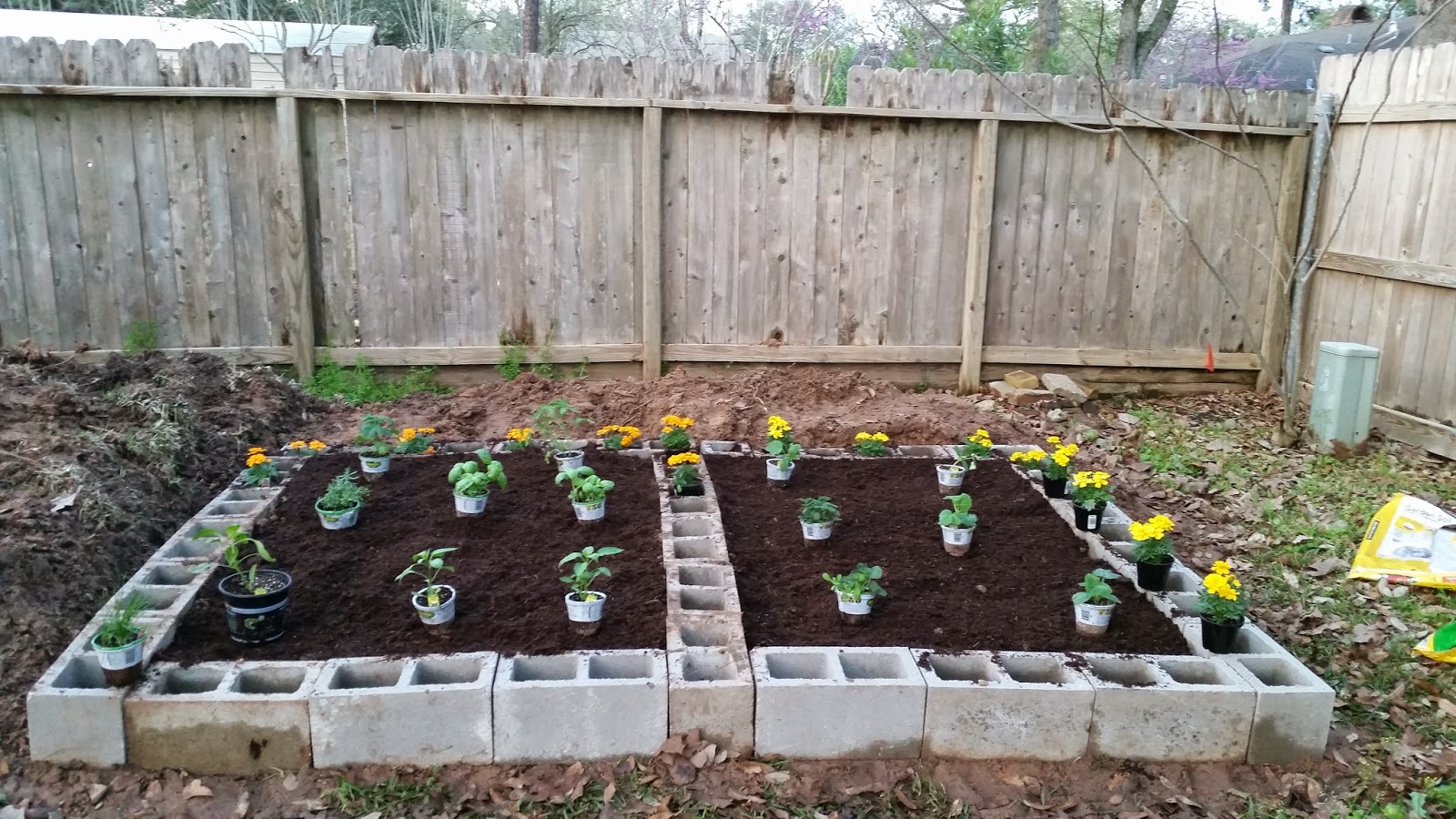 We came back home and I got to placing the plants in their spots.
By the time I got to planting the marigolds, I was racing the sun.
I finished just in time. 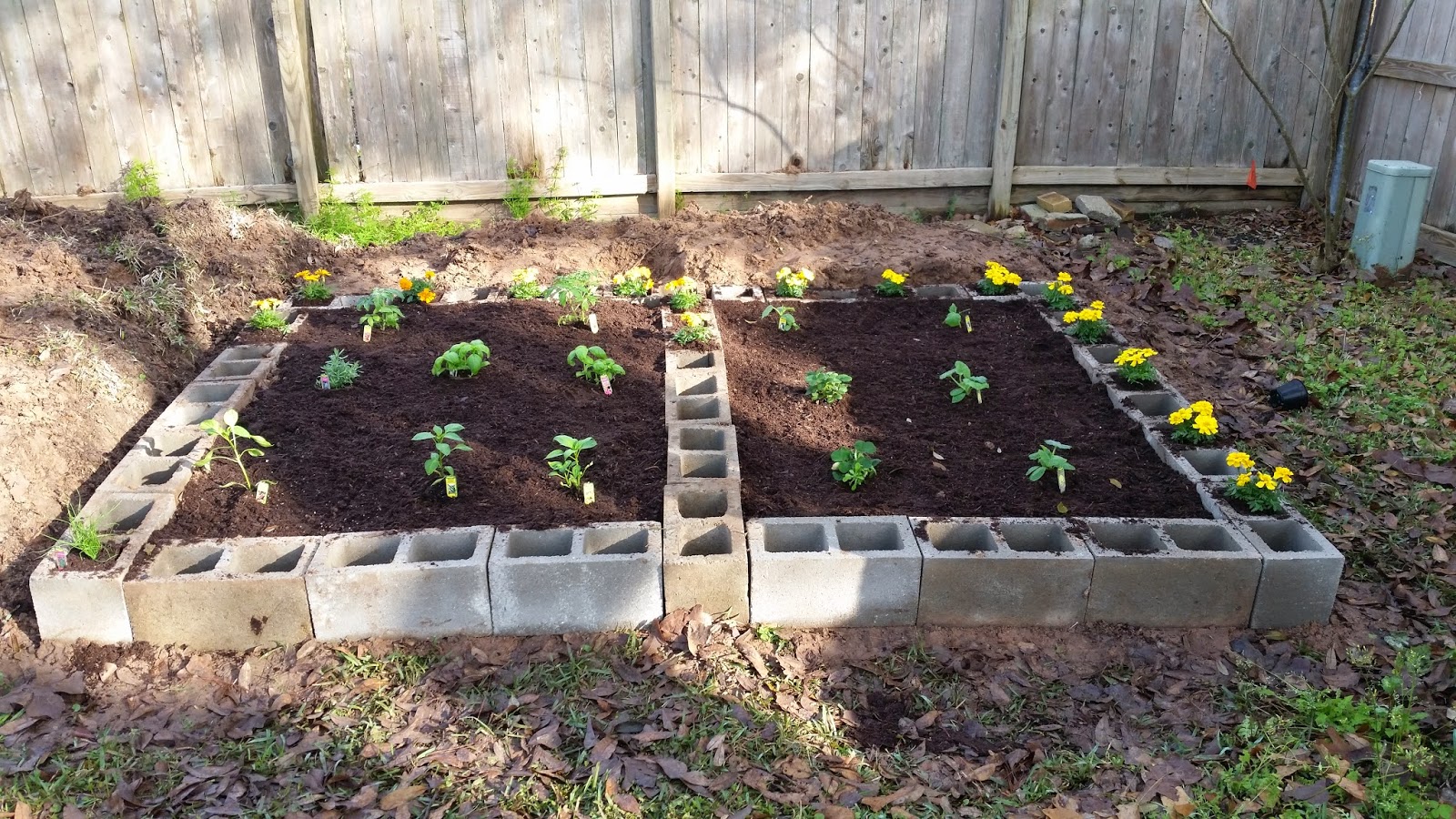 Finished garden (taken the next morning). 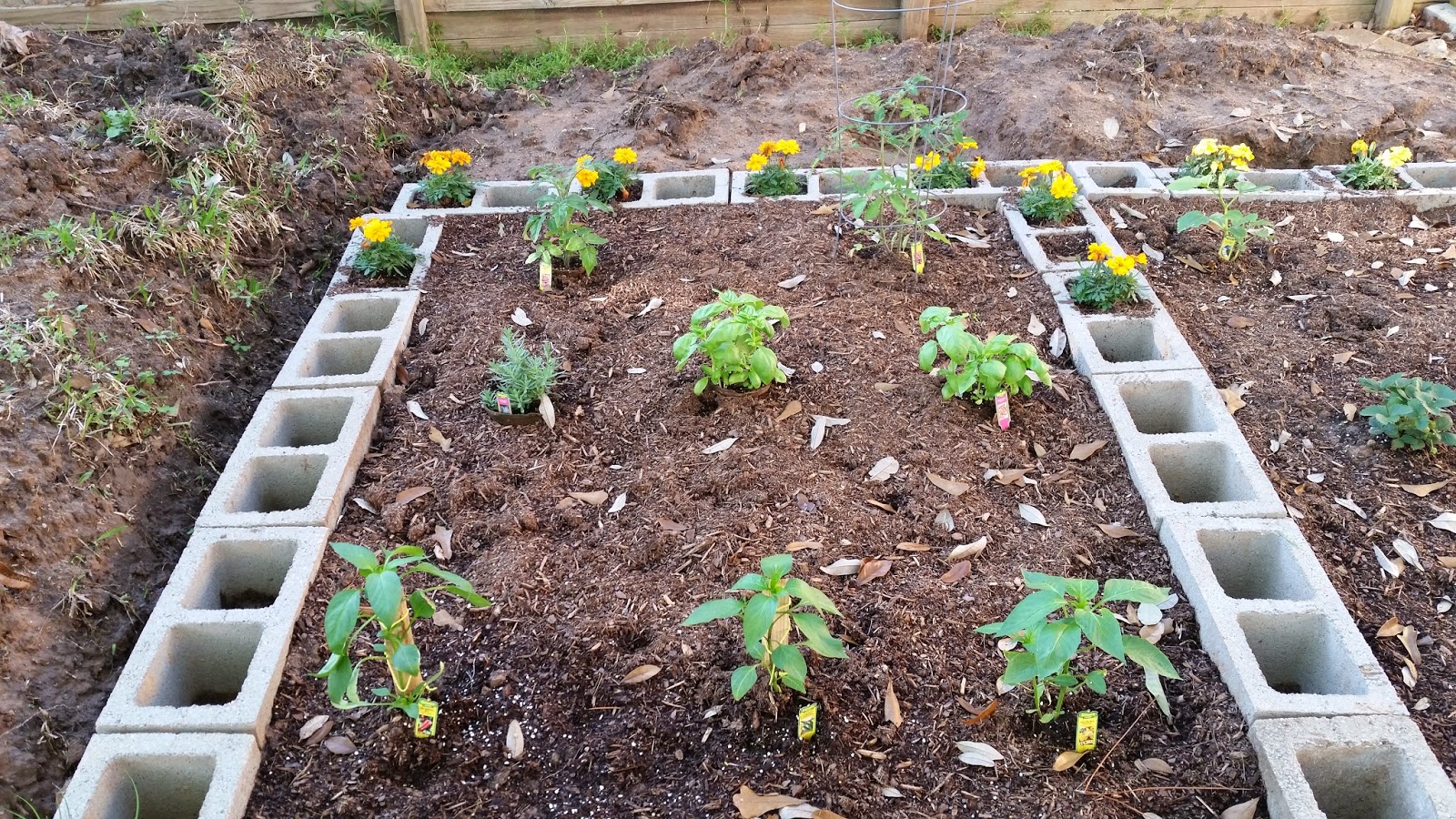 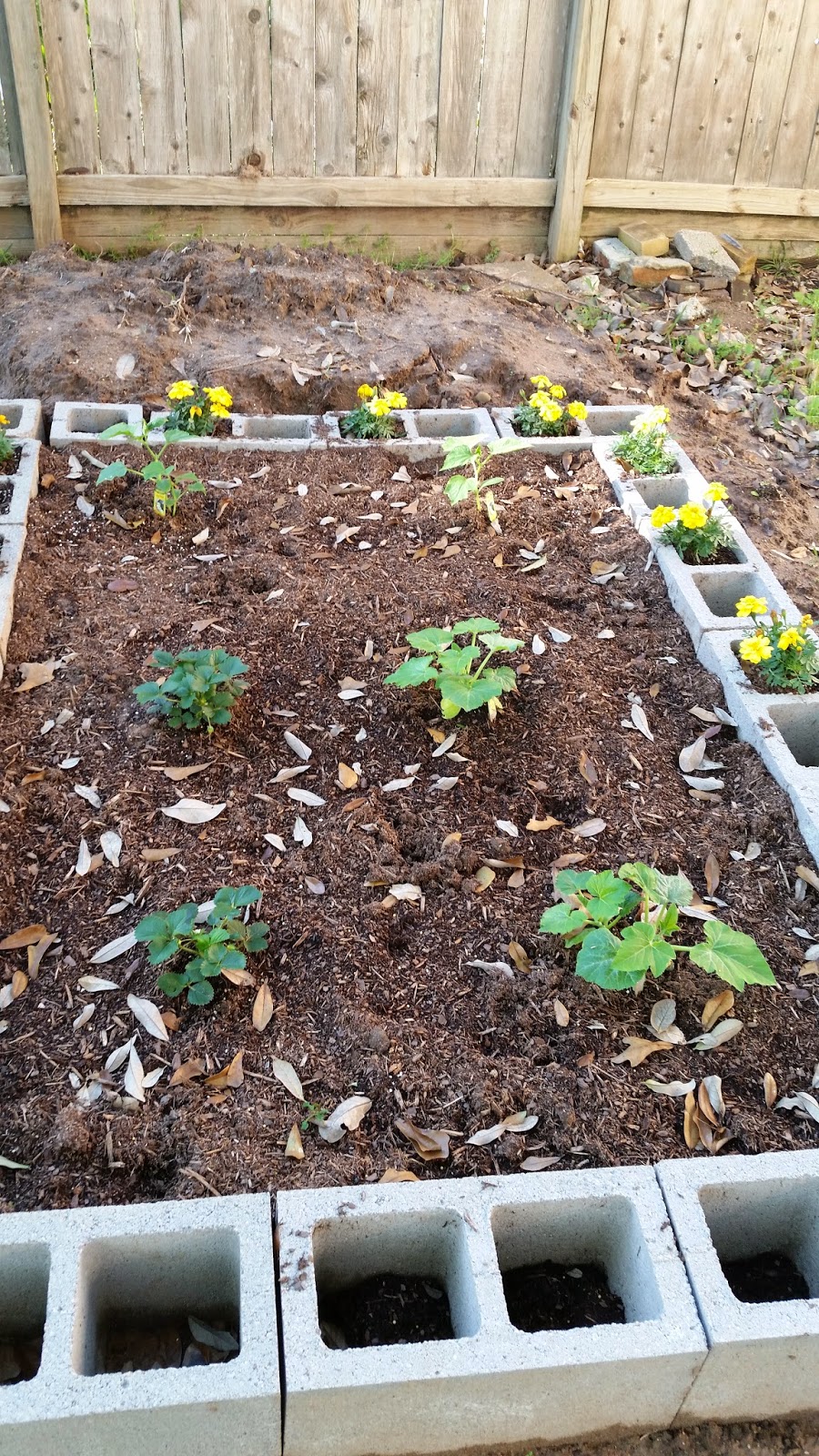 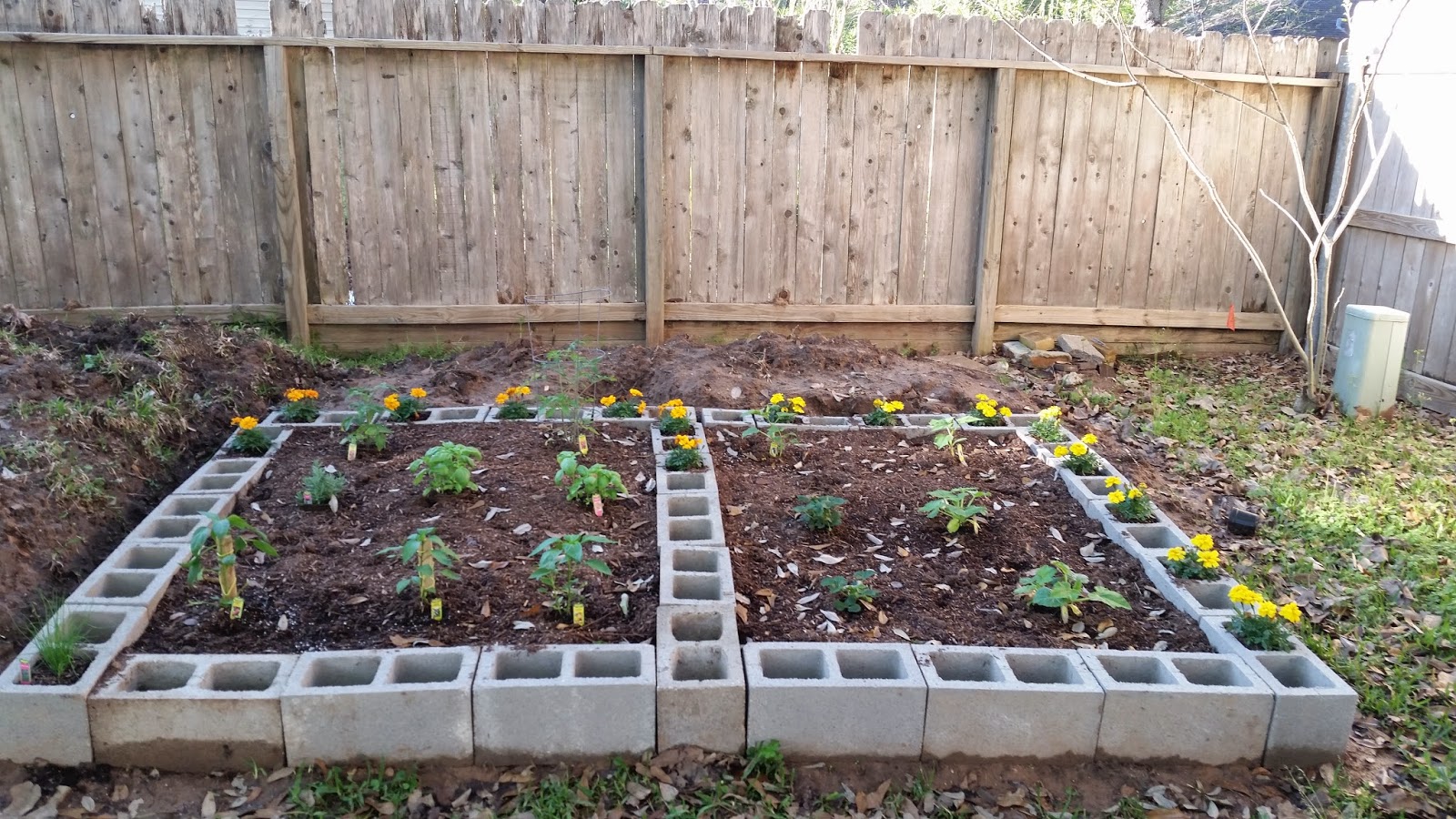 Garlic Chives are planted in the left bottom corner.

I planted Marigolds around the outside. I read that those are supposed to help with pests. Then I read in my magazine that it is a myth. Either way, they were on sale and they add more color to the outside of the garden. It is worth a shot! 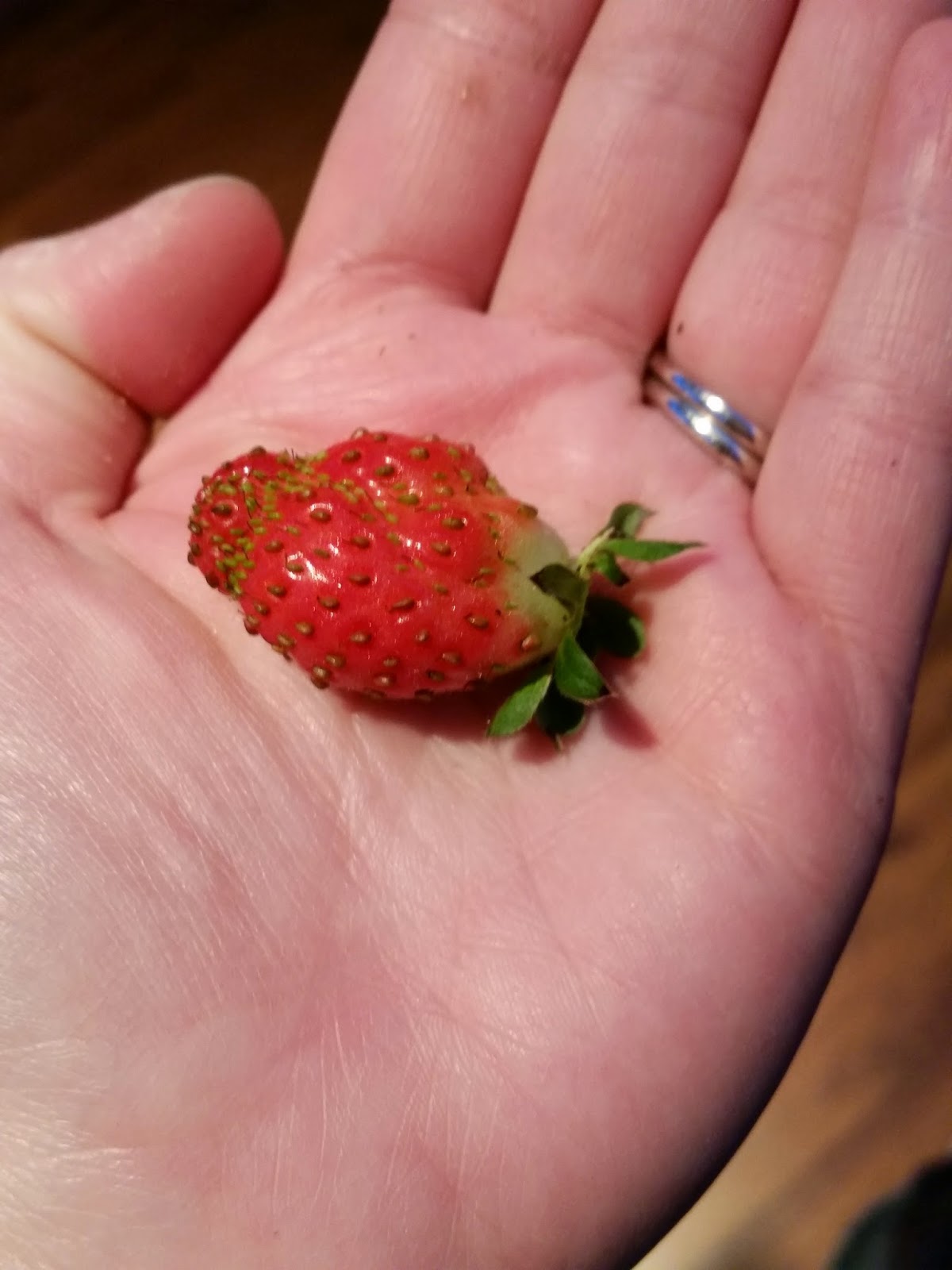 I picked our first strawberry last Tuesday (17th)
How, you say? So fast?
This little guy was growing on the plant at the store!

However, we have more coming! Each plant has buds and a couple baby strawberries growing! 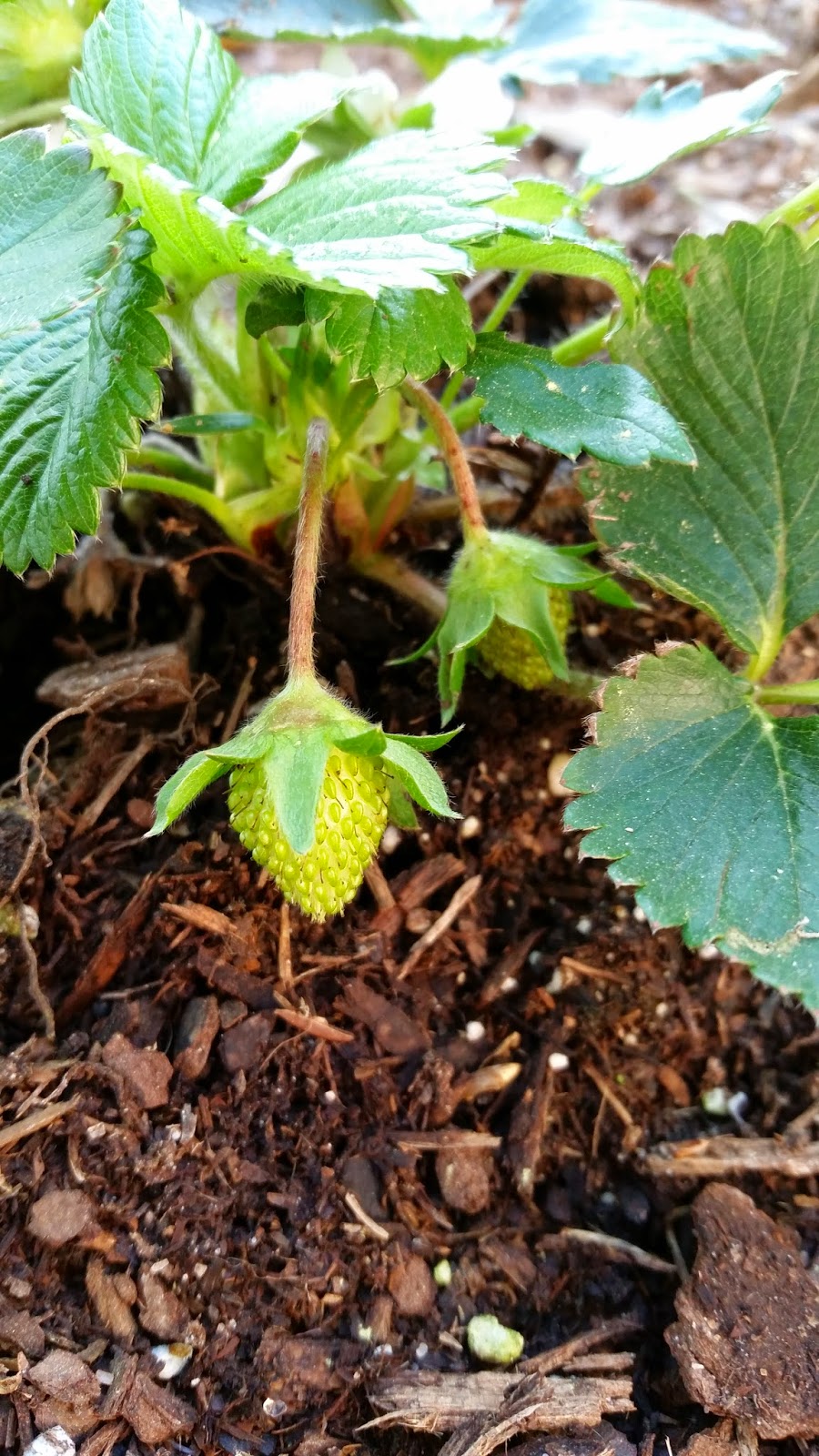 I checked the garden tonight. The tomatoes have buds on them. The squash seems to be doing awesome, there are multiple buds on each plant. The lavender is doing well and growing. The cucumbers seem to be starting to want to climb the trellis I have for them. No buds on the peppers yet or the cucumbers.
The basil is getting bigger, but something has been munching on it.
My clues: bite marks on the leaves and tracks in the dirt. I may net it soon, just so it can grow more.

Overall: I am so thankful that I am able to have a garden this year. I am so pleased that I was able to think, plan, and do a project like that. It makes me so proud when I see the garden to know that I did that! As crazy as it may sound, there were moments when I was digging and placing blocks, jamming to music I don't normally listen to (Nirvana...good trench digging music) and I was relaxed. The next morning after I planted my garden, I woke up early on a Saturday to go water. Something about that morning sunshine and watering plants.

I am so thankful for the slow and simple moments in the garden and in life!

Posted by Rachel at 8:10 PM No comments: