Lately, I have been really slacking. Slacking in cooking, housework and blogging!

I've been so busy with my long-term substitute job and when that ended the other sub jobs I took.

I've also been studying for the Special Education certification exam.

Since, today I have no sub job and I have already taken my exam(last Saturday). I have a free day!!

What a tremendous blessing!

So all that needs to be done is the paperwork to go through officially and I'll be Special Education Early Childhood-12th grade certified!

I'm using today and possibly tomorrow, to get things done around the house.

Why am I posting it here...to get me motivated and keep me accountable!

- Organize and put away things

Fun:
- Make apple pie- for Saturday
- Make brownie bites (got a cool new brownie maker from my grandma)
- Wrap presents- for Saturday
- Put together gingerbread house
- Play with kitties with their beloved feather stick - kinda hectic with 4 jumping at it, but they love it!

Necessary:
- Take Max to the vet, for his neutering
- Get the few gifts I have left to buy for Christmas


That's it! That's enough on my plate for today and tomorrow! Of course catching up on some TV is thrown in there too!

Have a great Thursday!

Labels: Blessed, To Do

A lot of critter happenings have been going on at our house since I wrote last.


It all started one afternoon when Joey went to Petco to get turtle supplies. He had dropped me off at Target to get a few groceries. When he picked me up, he told me that they were having adoption days and there was a really cute kitten there!

Once he told me that the kitty reminded him of Burney, I had to go see it.

I was nervous that adding a new kitty would mess up the great, peacefulness we had in our house since we got rid of Daisy. (She went to live with my in-laws.) Nemo and Lucius were finally able to relax without having the diva/grumpy girl cat around.

We got to Petco and he was so little! We stayed about an hour and after holding him, I decided that he was too adorable and he had to come with us. 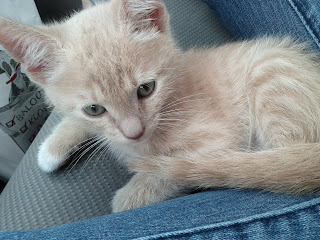 On the car ride home 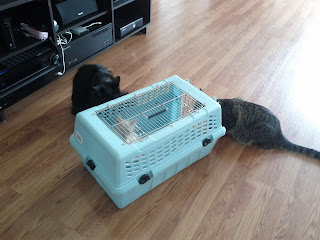 Nemo and Lucius meeting their little brother!
We didn't have my mom's nice crate, so we improvised! 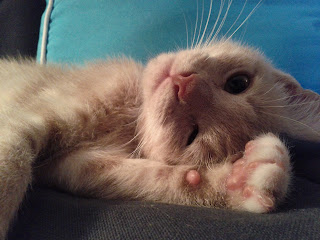 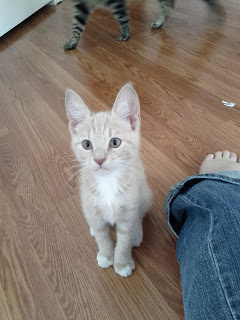 Nemo hissed at him for a few days. I guess he didn't know any different since when he (Nemo) came to our house, Daisy hissed at him. Lucius loved Max right away! Nemo got over being scared of Max and they now wrestle and snuggle!

Max is a snuggle bug! Sometimes a little too much, but he's a perfect addition to our family.
Right now, his favorite thing to do is to wake us up early in the morning with snuggles and kisses to our face.
His personality is like Nemo's and how Yao was. He's very curious, adventurous and out-going.
Our kitty count went up to 3. A perfect trio! :)

Then a week passed...

As I was going to the store one day, I noticed a young cat walking near our house. It was by a house with two young boys. I called Joey and told him to check and see if the cat was still out in 10 minutes...to make sure it wasn't that family's cat.

We decided to keep him in our guest bathroom and put up "Lost Cat" signs to see if anyone called.

No one. One lady, but her cat was older and calico.

Joey and I decided to try to find this little guy a home. I didn't want to have him for too long, since I was afraid I would get attached to him and want to keep him. We can not have 4 cats. That's too much work.

We posted on Facebook and looked into local shelters. I found one, by God's will, one random afternoon. I went into Petco and there was SPOT. They are all about finding strays homes. Perfect! I contacted them, and they have so nicely allowed us to foster this kitty.

We named him Owen since he is also the carbon copy of Nemo. Except his eyes are amber and Owen has short hair. We wanted to name him Omen, but I figured a cat with that name wouldn't get adopted. So Owen it was! :)

So each Saturday (for 2 weeks now) we take little Owen to our local Petco (which is a few minutes away) in hopes that he'll get his forever home. I am so very grateful that SPOT is allowing us to take him. They are so awesome, they have a cage, litter box and toys all ready for him when we get there. Owen's first adoption event he was very timid. It was some place new, with dogs barking and strange people. He sat in his clean litter box and slept. The second time was better.

I am so glad we decided to foster him, I didn't want to just take him to a shelter to wait to have a home. We are able to foster, and he can be with friends and be comfortable.  However, our ultimate goal is to get Owen his forever home :) 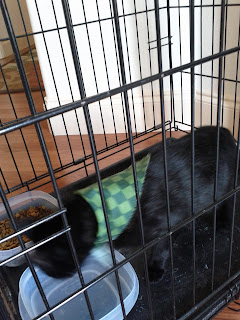 After his neutering surgery.
He looked so handsome in the scarf! 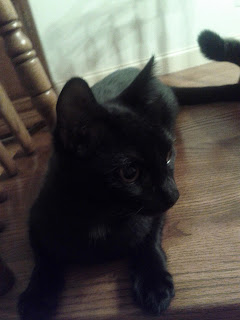 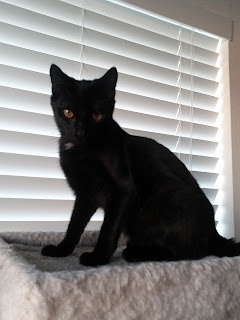 The sunlight made his eye color really pop in this picture.

We found out that he is between 6-8 months old, between Nemo and Max's age.

Owen is such a sweetie. His personality is like Lucius' and how Burney was - quiet, calm and laid back. He does like to play with Max a lot. I think he's a little intimidated by Nemo, since Nemo looks big due to his fluffy fur. It took him a couple of days to warm up to us, but now he comes and snuggles with us and the other kitties.

There you have it. 4 kitties in our house! It's a little crazy at times. Like meal time. The horde of cats come to meet me at the laundry room, where their food is. Lol! I believe God has brought Owen into our life for a reason. I trust Him that we'll find him a home! 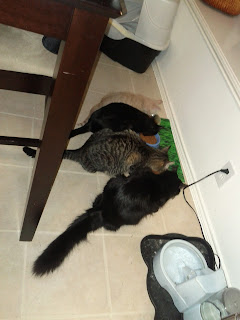 Front to back:
Nemo, Lucius, Owen, Max
Have a great weekend!