A few months ago I put together a plate wall in our house. In the formal dinning room we had a wall that was just perfect for one!

I had a silver fish platter, and the two free church plates I have posted about before. But I wanted 2 other plates to go with them. 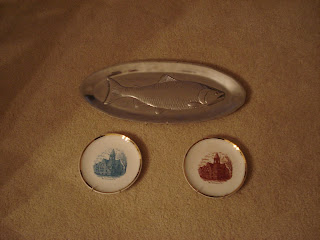 This is the placement I thought of doing before I got the other plates.
So one day my friend, Evelyn, and I went to Red Queens Attic. They have a little room that is full of old plates/dishes, teacup saucers, and salt and pepper shakers. I started digging and was so happy to find 2 plates that had the same type of look as the church plates. So I held onto them. I think I paid $5 for both. 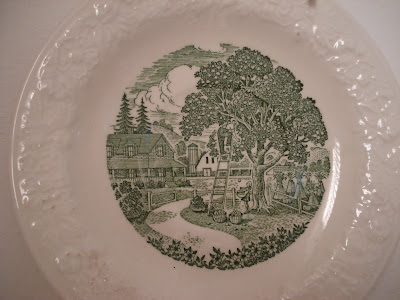 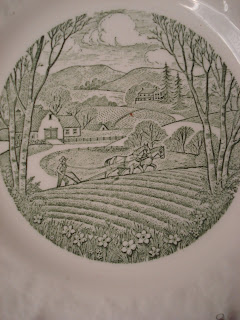 I liked them because their picture was similar on each. Plus the rim has a beautiful raised pattern on it(which is hard to photograph).
Once I brought them home I did a mock-up of how I wanted them on the wall. I wrote on them what each plate was. 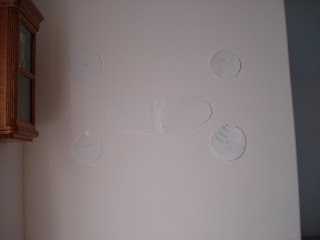 It's a little hard to see. Oops!
I moved the pieces of paper around until I though it looked level and good.  I measured how far down the hanger was so I would get it just right. Then I measured on the paper, marked it, drove the nails in, pulled the paper off...Wa-La!
Here's my final product: 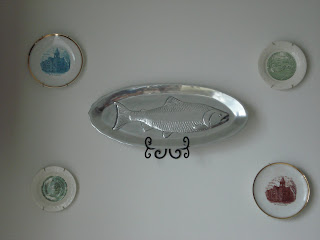 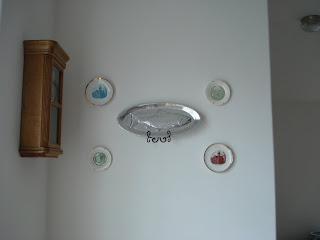 I had a hard time hanging that platter, it is heavy, so I couldn't use a regular dish hanger. I found this iron holder thing at Hobby Lobby! Gotta love that store!
Overall I am happy with it! The plates on the sides are pretty close to the side of the wall and I wouldn't want to put any plates lower than where they are now. So I would have a hard-ish time adding plates to it...eventually.
I am happy that it turned out so well though :) I think it will be a good while till I want to add plates. I was nervous about this plate wall, but I took the risk and I love the outcome!
Next on my list: a small,wall gallery of picture frames opposite of these plates.
I have the paper hanging on the wall already!
The lesson I learned with this, take a risk. It's your home...the worse you can do is not like it. Then you can always fix it back if that's the case! (Of course this is applies to smallish changes...not like knocking down a wall...but I guess you could always build one back) :)
One side note: just make sure that risk is something that your husband would be okay with. I would not advise surprising your husband with an all pink bedroom/bathroom, unless he loves that color! Honor him with your choices. Ask yourself, Would he like it too? My husband is not too opinionated on decor, so I went ahead and did this plate wall. If he would have said he hated it, it would come down because I love him and want him to like the home he's living in.
That being said, take a risk...get new pillows for the couch, rearrange the furniture or decor, hang that picture that you love, make that craft you are nervous to create. It might just turn out better than you expected!
Posted by Rachel at 3:44 PM

what a great post! i love that you took that risk, and that you considered that a risk. i think it's easy with blogging to think you should be doing something, even if you aren't comfortable with it. it is a great collection, which can easily be added to, like a gallery wall. i want to change out the art above the tv for a gallery wall, but i know the boyfriend hates making holes. i'll have to use something heavy duty.