Wow...I posted at the beginning of September, and now October is half over! Time goes by so fast!

We had lots of things to do in September on the weekends.

The weekend after I posted about wanting a record player we went to our first auction.

I've never been to one, my only experiences are ones for church functions and Auction Kings on TV. I'm sure you can already guess this, but auctions are not as fast paced as on TV.

My cousin and aunt like going to auctions and always seem to find the neatest things. So that Saturday I asked Joey if he wanted to go. He said sure, there was a cool jukebox he wanted to see.

First thing, I notice when we walk in the building a box of comics up for auction. I had just read about someone's awesome score on comics from a garage sale. So I told Joey I would love to have them. Most of the comics were older and really cool looking.

We kept the comics in mind and kept looking around. Then BAM...there was a record player! Not only that, but 2 boxes full of records up for auction as well! Score! We decided to try for both.

The comics were one of the first things up to bid, since it was for St. Jude hospital. It was a medium sized box full of comics. Sold to us for $30!

It wasn't until about half way through they got to the records. We bid on those and got those for $30. The guy we were bidding against came up to me and wanted to buy one record album from the box. We didn't know anything about it and it wasn't valuable to us. It was more valuable to him. He offered $5 for it. Sold! So we really paid $25 for the records!

About 2 items later the record player went up to bid. The auctioneer started at $100...went down to $50....went down to $25. No one was bidding! He asked for any opening bid. Joey said $5! We went back and forth with one other guy. I was getting nervous! We had all these records, we needed a player! Joey bid $25, that was the other guy's stopping point! We won it too!!

We had the perfect spot for it. It's one of the first things you see as you walk into our house! 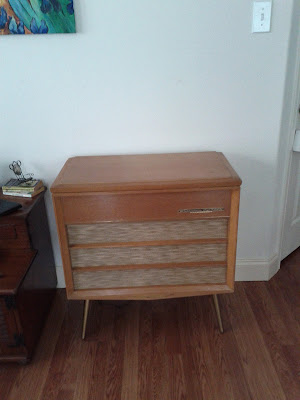 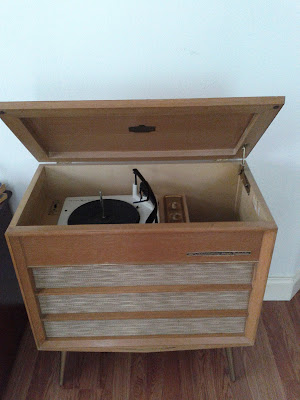 It works well too!
The starter to get it to spin, doesn't work,
but give it a jump start spin and it works awesomely!
Speakers work great! 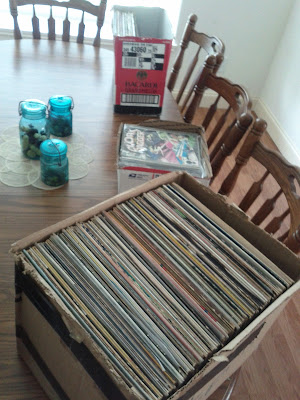 The 116 records (front box and the back red box)
There is all types of stuff in there!
Michael Jackson "Thriller"
Beach Boys "Endless Summer"
Carpenters
Ac/Dc
Janet Jackson
Diana Ross- I think

I can't remember all, but there's some good stuff.
There's 2 Halloween "Spooky Sounds" records that I plan on using this year :)

The comics are in the middle. There is an old Porky Pig in there and lots of other neat ones.
I love adding to these to my collection!

I thought, and still think, it was such a blessing to find a great deal on a record player.
Especially since I had just expressed wanting to get one.

Another weekend in September we started working on the turtle tank.  The filter we had starting leaking. So Joey started researching online to get a replacement filter. As he was researching, he discovered that our 75 gallon tank was actually not adequate for our turtles.

Red ears are supposed to have 10 gallons per inch of their shell. Well, we have 2 and our biggest (Nibbler- female) was was 7.5 inches long. Meaning she needed 75 gallon just for her! Yikes!

So he researched more on what we could get and found a fantastic idea!!

A stock tank. Like one for water for cows and horses. Yep...you read that right!

We headed to our nearest Tractor Supply store. Got a stock tank we liked and could hold the amount we needed. Loaded it and moved the old stuff out! 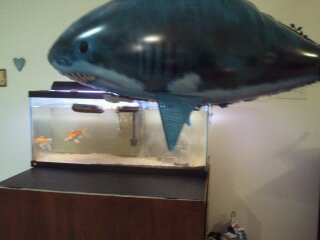 Please ignore the flying shark! Lol
Wooden thing- a turtle tank we built in 2010...started leaking :(
On top was the tank we replaced. 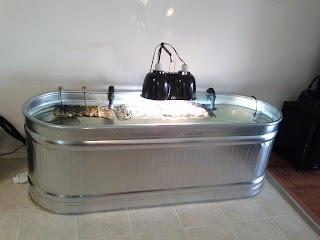 Ta-Da!!
The light is supported by a stand that is under the tank, so it'll never tip over.
I love it!
It takes up a little more length room, but it's not as wide.

Since this picture:
- We  Joey made a dock from plexi-glass, tile squares, and PVC pipe.
(The turtles love it and it looks nice!)
- We added another heater (can't really see it)

We were pretty busy the rest of September! I'll post soon about what's been happening this month.

I hope your having a great weekend!

that record player is awesome! great job on the bidding!