So bad news, our closing date is getting pushed back till "early next week". The problem is the office doing all the paperwork is going slow. The bank wants to be able to look at it for min. 72hrs. And even though we have had this set date for a month they can't seem to get it together. UGH!!

I'm sorry guys I just need to get my frustrations out. We had everything planned for this weekend. We were going to get the carpet cleaned this Friday, along with Lowe's coming to deliver our appliances. I was going to spend my day off cleaning the house and then Sat. we were going to have family out and we were going to be moving in some. It is just so frustrating!! Now poor Joey has to call everyone and tell them not to come. We don't even know the exact date yet!!! And instead of me having a nice day off and be able to get the house ready I will now either have to wait until the weekend or go over there sometimes in the week and clean.

I was so looking forward to this weekend. Having to maybe miss class (don't worry we don't do anything in that class anyways) on Thurs. and go close and just to get everything rolling and have a nice long weekend to do everything.

I guess you can tell that I really don't like it when my plans have to be changed. I get everything planned out and when it doesn't go the way I thought it would I get upset. That is something I need to work on with the smaller stuff. But this is major. I know everything will work out and there is a reason for this, even though it really makes me angry right now, maybe we will see a reason for this later.

I will keep you updated on when we close. I really wish that the bank could shorten their days to stare at the contract, or the office handling our stuff could hurry up and rush it to them so we could close when we are planning to.

I am trying to not be so angry and upset about this. I'm sorry this post is such a downer.

Oh, I have a story that might make you laugh.

The other day when I was about to go to my class I noticed that there was something on the back of the driver's seat in my vehicle. I looked more closely and it was a baby praying mantis. I was so excited bc if you know me I love animals and baby anything makes most every animal even cuter. So I struggle with him (I made it a male) to get him to go on a leaf in a tree nearby. Well it was windy and those things jump. So I lost track of him and I went on my way. Then when I got home I noticed that he had made it back to my car. He was sitting on the trim on the inside. Again I tried to free him and lost track of him.

Then Fri. I got in my car and saw a lil dead praying mantis on my steering wheel. It made me sad bc I thought he ended up in my car again and he died (from the heat). Well yesterday I went to Target. Got back in my car and there were 3 praying mantises on my door on the inside. I looked back in my car and noticed about 4 or so more baby praying mantises all hanging from the ceiling!! ACK!! It was scary! I managed to get the 3 out of the car that were on the door. But one started crawiling on me when I was almost home. Then Joey came out and helped get them out of the car! :) There were about a DOZEN of them!!! Even this morning I found a dead one hanging on in my visor!

Now I would much rather have had those than baby spiders or something that would bite. But there were just WAY too many of them for me!! Oh and the culprete that brought them into my car....planters I bought at the Needville City Wide Garage Sale. I had them in my car and was going to keep them there until we closed. So now they are outside our door!

Here is a picture of what they looked like: 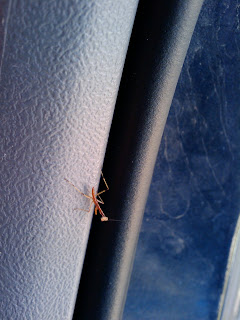 It's a funny story :) I feel better now.