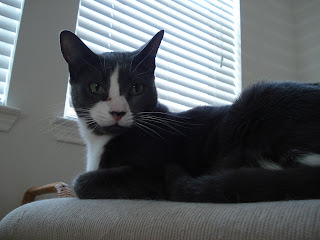 Monday we went out to eat with Joey's parents to celebrate our birthdays. We came home from eating dinner to find that Yao had passed away while we were gone.

It was such a shock. He was perfectly fine that morning. We had snuggled with him and played with him just before we left.

He passed away laying on our bed. One of the spots he loved to be. He was 7 years old. We think he might have had a heart attack, but we are not sure.

I just hope it was painless. That he went to sleep and went peacefully.

Joey was so sweet and dug a hole so we could bury him. Joey picked a spot in the backyard so that I could see him from my desk.

I have never cried so much as I did that day.

I have gotten a little better. The mornings and the nights are the hardest.

Yao was my snuggle bug at night. He would sleep right next to me and let me hold him like a teddy bear. Then every morning he was there when I was getting ready.

I miss him so much and it is hard to believe he is gone.


Burney and Daisy seem fine. Daisy watched as we buried him. I know she misses him, she grew up chasing him around (until Burney came). I think Burney really misses his big brother though. They were best buds.

Yao was my first cat I've ever had. I could not have asked for a better one.

He came when I called, everytime I would call "Yao Man, where's my Yao Man!" he'd come running.
Yao would "talk " back to me. He minded me when I told him to.  He hung around me when I was sick. He greeted us when we came back from trips. Most of all he snuggled with me.
Just a good kitty...so good.

I am just so happy that the last morning and afternoon we had with him we played with him, let him snuggle under the covers, petted him and showed him love.

Some quirks of his I loved:
- He loved smelling hair. Especially Joey's!
- He liked being on Joey's pillow
- He smelled my straightener every time I used it.
- Every once in a while Yao would start meowing randomly from another room. When he did this when he was younger I could call him to let him know where I was. Later on, I think he was calling Burney.
- He loved drinking from the faucet.
- Each time we would let him outside he seemed to be determined to sample each piece of grass.
- He smelled the fridge when we opened it
- When he thought no one was watching he would just be so giddy playing with his bell ball toy. I loved that! If he saw me watching, he'd stop.
- When he was younger he would claw around the bottom of my mom's chairs. Zooming around on his back. It was so funny!
- The way he crouched ready to pounce on a bird outside.
- He would *lick, lick, nibble* on you. Like he had to clean you before he nibbled.
- He would drag his stick toy to you. Then he got to where he'd just sit on it and stare at you until you played.
- He was so interested in the shower. After I got out, he always wanted to go in. I kept telling him that it was  "kitty torture chamber" and that he wouldn't like it.
- Somehow this started...I'd tell him to lick my toe...and 90 times out of 100 he would.
- He answered to his nicknames Yao Man and Monster (gotten from when he was a stinker when he was young)
- His purr was so loud!
- He snored sometimes

He was so full of personality! 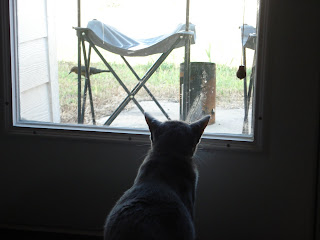 Yao will always have a special place in my heart. He is greatly missed in our household.

We love you Yao! 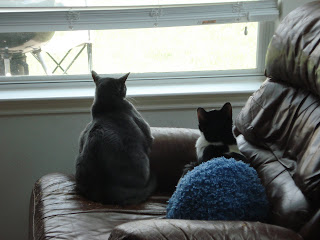 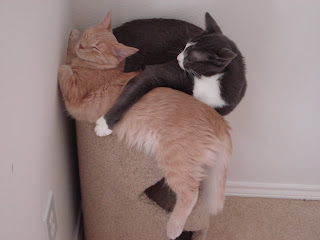 oh my gosh, this makes me so sad! i am so, so, so, sorry to hear that, rachel! he sounds like such a wonderful kitty who knew you loved him, and loved you and his kitty siblings right back.

I am so so sorry for your loss, I truly know how you feel, we lost our dalmation unexpectedly in June. I enjoyed red
Adding about all of his little quirks. He was such a lucky kitty to have you guys as a family. Take Care, Carrie