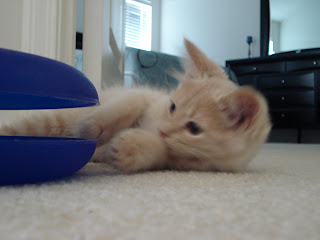 So most of you know about Burney. If not here is the story:

On the way home, about 2 weeks ago, Joey noticed something in the road in front of him. The car in front of him went around something and at first Joey said he didn't think the kitten was alive. Then the kitten moved so Joey stopped and picked him up. The kitten was having problems walking and was really malnourished. He brought him home where I then took him to an animal hospital. At that time the kitten was so terrified that he would hiss and jump at you. So the vet was not able to really check to see what was wrong with his back legs. The vet said that his hip was broken. We didn't do any x-rays since it was so expensive and we weren't sure how well the kitten would do. So we decided to cage-rest him and give him medicine.

By the next day Joey was able to pick him up, very carefully though. We would move the cage where ever we were and we opened the cage up that night and he wobbled around checking out some stuff.

Between that Friday and Monday Burney used the big litter box (we created a little one inside the cage for him to use), he would go and use it when he needed to w/o accidents. He could walk around just fine without any problems!! So that Monday we decided to let him stay out of the cage.

Now he is doing amazing!! Like a little miracle happened, yes I did pray for him. May sound strange, but I would not have been able to handle something bad happening to him. Yesterday he ate what I call big boy food (dry food). He runs around after me. He can climb onto the couch. He is very vocal and snuggly! I love it! He's very fluffy, I'm not sure if he's going to be long haired or if it's just kitten fluff.

He fits into the cat family very well, he is terrified of vacuums. :) Daisy and Burney are still working out their differences, for the most part she avoids him. Sometimes they can be close w/o hissing. I think Burney looks up to Yao. Burney will rub up against him, follow him around, and even goes to see what Yao is doing when he's drinking Burney's water. It is so adorable!!

So there's the latest news on what's been going on! More to come later!