This post has been a long time coming. One of the first reasons it has taken so long is because after we closed on our new house this past September, we spent two months renovating it. When I say renovating it, I'm talking about flooring, painting, painting, and more painting. The other reason is, there are SO many photos to post!

First things first. Why did we move? A lot of people have asked us that! Our last house had 4 bedrooms and lots of room, it was in a nice suburban neighborhood, and it had sentimental value. The sentimental value is still there, it will always be since it was our first home. We bought it only 3 months after we got married. However there were some things we could not change about it. 1.  The location: it backed up to train tracks, which made our back yard unusable when the train went by. When we were inside it was no big deal.  2. The yards were small. Meaning when we do have kids, they would have to play in the streets, like the other kids did. Joey and I didn't like that. Since we grew up in a small town on huge lots, we played outside a bunch and we want that for our kids as well. 3. We had a whole room we were not using. It was "the box room".

So when a house came for sale in a neighborhood we liked (Joey's cousin lives in it and we have some friends in the hood too), we decided to look. We were not seriously looking. Once we looked at the house, we really liked it! Joey and I decided to pray about it and see where God wanted us to be. In the end, we put in an offer to see what the seller would say. If the seller didn't take it, no big deal we would stay in our house. As you can guess the seller agreed and we took that as a sign. :)

I am so happy with the decision we made!! We have a house that has a better layout for us and we were able to make it our own!

Moving along to the fun stuff!
I will not be able to post all the before/after pictures into one post so I will be writing multiple posts :) 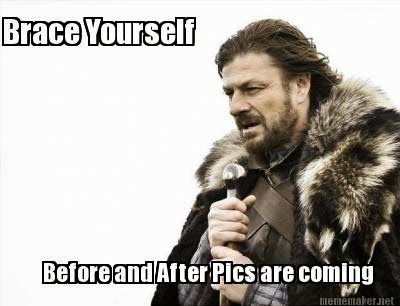 Stay tuned, pictures are going to be posted soon!