I told Joey and he found out that on May 4th it is Free Comic Book Day!! Yep! A day where you go to the comic book store and they have free issues out for you to pick from!

So when May 4th rolled around, we went to the nearest comic bookstore. Then we went to 2 other stores! 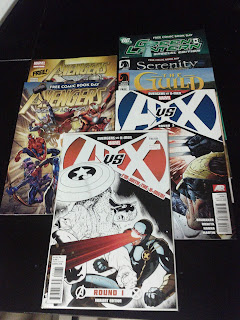 Here is what we got!

I had watched a show by Revision 3 called Variant, which talks about comic books.
He talked about the Avengers vs. X- Men as a really good series. So I bought those 2.
(One is a Variant cover - or rare- since they didn't have #1 in normal)
The other 5 were free!!

I was SUPER excited.

The more and more I read about Avengers vs. X-Men, the more I wanted to know about a certain character that shows up in the story. I've never heard of that character before.

So in order to get the back story on that character I got a few graphic novels (which are a bunch of comic books put into one bigger book- can be much cheaper than buying them separate).

A few weeks pass. I get the new Avengers Vs. X-Men every 2 weeks when they release.

Then one day I hear on the radio about Comicpalooza! Joey heard about it too. It's Houston's Comic Book Convention, like our ComicCon. Um, yes please!

So off we went to Comicpalooza! It was SO much fun!! There were famous people doing autographs, panels, booths with cheap comic books, and classes.

Here are a few people we saw: 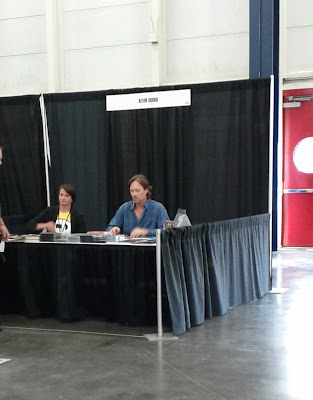 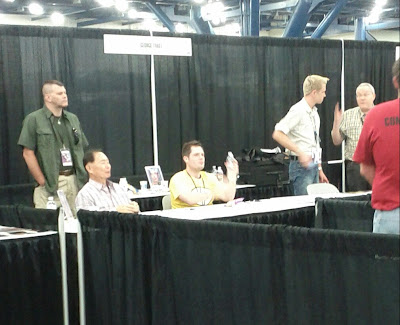 We didn't go talk to them, since it was pretty costly to get an autograph or picture with them. So I just stood at a distance and took pictures. Lol

This place was an awesome people watching experience. I maybe weird, but I love people watching.
There were all kinds of people. Some were dressed up as super heroes, steam punk, there were roller derby girls...all kinds! 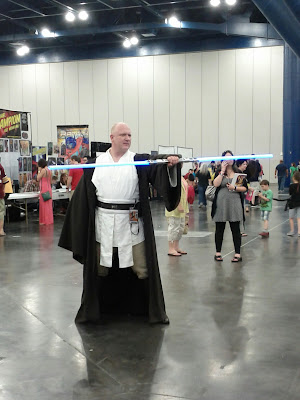 We saw this guy, I though his costume was impressive.
He was posing for a picture already, so I just snapped a photo.

One of the cutest moments was the little kids seeing guys dressed up as Iron Man and Captain America
and the look on their faces when they got to take a photo with them!
So adorable!
We even saw a little Hulk getting his picture taken with Iron Man. :)

One of the classes they had was Intro to Belly Dancing.
I thought what the heck, I don't know anyone, so if I look silly...who cares!
It turned out to be super fun!
The lady teaching it was great, she didn't allow any creeper guys to just sit and watch.
If they were there, they participated. :)
I didn't drag Joey to this one.
He looked at the booths while I was in the class.

We went to a few panels.
Some were tech/gaming talk and we went to a Tv star's panel as well.
It was really fun!

We also got some comics for Joey.
(He's read Hulk vs. Avengers, Scarlet Spider, and Cable so far)

That night we laid all our comic books out.
This is what we had :) 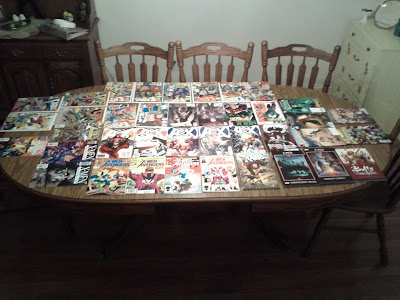 Since then I have finished all 4 graphic novels that are in the bottom right.
And we have added 6 comic books since this picture.
Mostly my Avengers vs X-Men comics, Scarlet Spider, and a few Hulk vs Avengers

If you can't tell I am defiantly a Marvel fan.
And I love the X-Men back story.
(There's a rich history!)

Since I ran out of X- Men graphic novels, Joey recommended a graphic novel he's had.
It's a DC graphic novel.
I'm reading that right now.
He got it from a friend a long time ago it's called Kingdom Come.
It has the Justice League
(Superman, Wonder Woman, Aqua Man, etc.)
We'll see how it ends!

I can read through a comic book or graphic novel much faster than a book.
Some of the Avengers vs X-Men I finish on the way home from the comic book store.
(Joey driving, of course)

The stories are so good too!
So I can't wait to get the next issue or the next graphic novel!

yowza, that's a lot of comic books! free comic day, i'd never heard of that, and philly's comiccon had spike from buffy (who i flipping loved!!). belly dancing! you're so bold! love it!

Hehe, yeah our collection grew quite a bit with all those $1 comics! That is awesome Spike was at your's! We're Buffy fans at our house, we watched all of the series about 2 summers ago. The vampire we had at our's was Pam from True Blood.