One of the first projects we did was add accent lighting to our kitchen. It may sound silly, but the only major lighting we have in our kitchen is a florescent ceiling light, a stove/vent light, and the one above the sink.

Joey had been talking about getting LED strips to go above the cabinets for a while. I always thought it would be that super bright blue-ish light so I said no. Then he showed me pictures and how I could get under the cabinet lighting. Once he said that I agreed! I've never had lighting that lit up the counter tops, but I have always thought that would be nice to have! We installed this in a night. 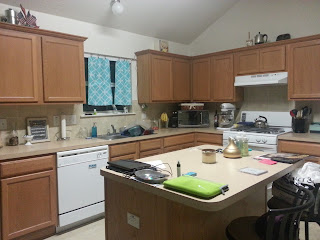 Before with florescent lighting
(Everyday mess included in picture) 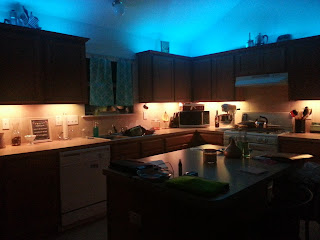 I think it's one of the best projects so far! We got the tiny LED stripes from Fry's. They are just thin light stripes with heavy duty adhesive on the back.

One thing I love is it changes to any color and their brightness can be changed.
It comes with a remote with all the color choices, anything from red to violet.
There are also many white settings. One more blue, one more yellow, etc.
Defiantly money well spent!

One of the major projects we did this year was get us a shed! 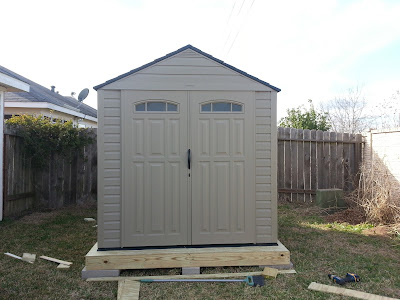 We got a Lowe's gift card from my dad and step-mom so that went towards getting us a shed.
Over Christmas we decided we wanted to eventually put the litter boxes out in the garage.
However, we had all this carpet and lawn stuff in there.
We had carpet/flooring stuff from when we had wood laminate put in our house.
Like 2 years ago!

So we hauled the carpet off and got to cleaning.
We needed a shed so that each time we needed to mow, we wouldn't terrify the kitties by opening the garage door. 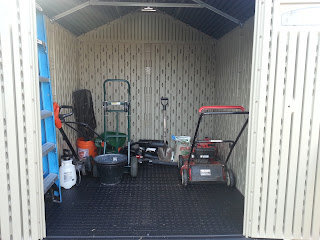 It holds all our lawn stuff and we still have room!

Joey, my father-in-law, and I did that one weekend. 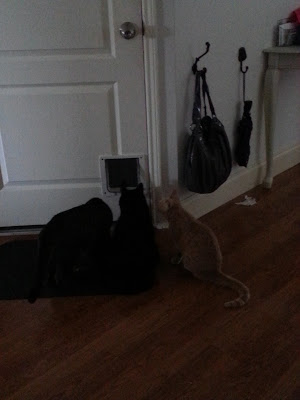 After that, the next weekend, we got the cat door.
It was pretty easy to install.
Joey cut.
I supervised.
;)

We have a major draft when it gets windy outside and it used to blow open the door out to the garage. Which always seemed happen when I was watching something like Supernatural or CSI!
The picture above was on a windy day, and the flap blows in. The cats were all fascinated by it!

After we installed it, we moved the smaller of the two litter boxes out there.
To help train them, we used treats and called them until the came through the door.

It took about a week. Then I put the 2nd litter box in the garage.
Now our house is litter box free!!!
YAY!

This past month I installed a dimmer switch in our formal dinning room. We bought it with a gift card right after Christmas. I was a little intimidated to do it, but decided that weekend I'd get it done. Everything went well! The hardest part was re-bending the wiring inside our walls to go around the screws on the new switch.  I love the effect it gives! Cheap and easy to do!

This last thing isn't a project, but something fun Joey and I ran across at Academy. 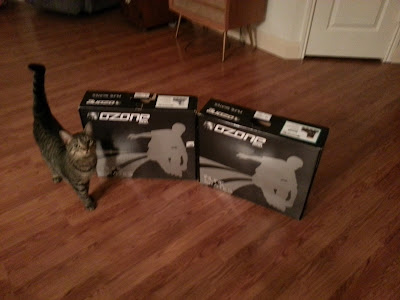 A little blurry, but I love how Lucius is looking right at the camera!

Rollerblades!!
They had a good sale on them, so Joey and I got a pair each!
I haven't roller-bladed since my pre-teen days and I am so happy we got some!
We got them a few weeks ago and have only been able to go twice.
The weather has been really windy or icky lately.
However, I am so excited to get to do that more when Spring comes!

That's all so far! I love how productive we are being! It feels so good to get projects done!

man, you've been busy! love the lighting-i think it's necessary for under the cab lighting. yay cat door! we have one, and our cats have been really good about it, they just took to it really easily. have fun rollerblading, too!

Thank you! I love having the litter boxes out of our house!! No kitty smell! :D I hope you're doing well! It's been a little quiet around your blog. Totally understand how it's hard to blog at times. Life happens! I went a while wanting to write, but then not finding time. I wish you, your man, Sunday and Lily a great weekend! :)