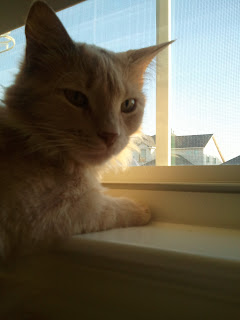 On Christmas Eve, we had to make the hard decision to put Burney to sleep.

It all started with a UTI he had that would not clear up. He had megacolon in all three parts of his colon, so he could not get rid of waste as he should.

The UTI caused him not to drink any water, since it hurt to go potty. I took him to the vet about 2-3 weeks ago and they discovered he had one. At that time he was 12 pounds. Joey and I were SO proud, since he has been sick all his life and always was underweight. That was the heaviest he had ever been. We thought the methods we were trying were finally helping with the megacolon issue.

Then I  took him the Tuesday before Christmas to get fluids because I knew he was dehydrated. They weighed him and he was 10 pounds. He got fluids and I thought he would get better. We kept giving him medicine for the UTI.

Saturday, Christmas Eve Joey and I noticed he didn't move much, was lethargic, and looked like he was in pain. So we decided to get him to a vet. Since our normal vet was not open, we took him to another great vet.

They weighed him, he was 9 pounds. He lost 3 pounds in 2 weeks. The vet said he was 12% dehydrated and at 15% dehydrated cats no longer are alive.

My poor Burney's temperature was also down to 96 degrees, where it should have been 101-102.

The vet said that we could emergency hospitalize him, but there was no guarantee that he would make it and return to normal.

Our baby Burney has been sick and in and out of the vet, getting procedures, all his life. So we had to make a decision.

It was so hard to do. To make that decision.

We hugged, held, petted, and kissed him. I told him he was such a good boy. Which he was.

I did not choose to watch the procedure. I couldn't handle just making the decision. There was no way I could have watched.

I gave Burney one last kiss and the vet took him.

I lost it. I just cried in Joey's arms.

It was so hard to come home with that empty cage.

We chose to get him cremated and Burney's ashes will be buried by his best friend, Yao.

We miss him a lot. A whole lot. 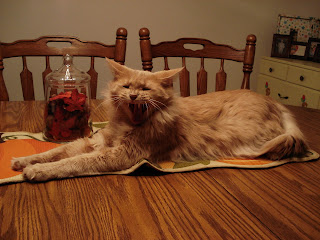 Burney was our little lion.

Burney was such a good kitty! Everything he went through, every prodecure, every vet visit, every medicine feeding, he was awesome. I think Burney knew that we were trying to help. He was never mad at us for anything. 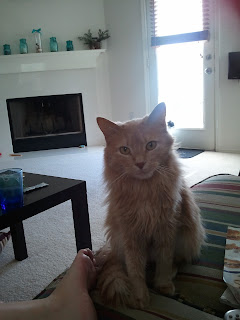 Burney staring at me to get done with my Fruit Loops so he could drink the milk.


Burney had such silly quirks!

- He was such a quiet kitty, such a sweet personality. After Yao passed away, Burney took to sleeping in the exact same spot as Yao did. As if to help comfort me at night.

- He LOVED drinking milk. The above picture is him stalking my milk that was in my cereal bowl. He kept meowing at me and trying to crawl on me to get at it.

- He loved tuna, of course...he's a cat, I know. But as soon as I opened a can, he thought it was tuna. He came running to the kitchen. He would meow like crazy. (Meowing wasn't something he did all the time)

- Burney chattered at birds. I LOVED this about him! None of our other cats did it. It was so funny, the first time he did it, we had no idea what the noise was. Joey figured out it was Burney watching a bird! 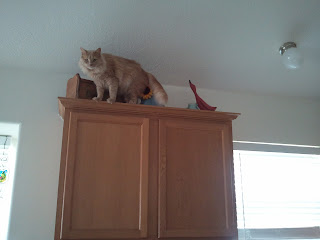 - Burney liked getting on top of the kitchen cabinets and watch me do stuff in the kitchen. Every once in a while he would jump over to the cabinets that hung all by themselves.

- He loved the ladder. We would get it out to use it and just keep it out for him. He loved sitting on the very top and looking down at everything. That earned him the title "King of the Ladder"

- Burney liked to scratch on the door frames. I have no idea where or when that exactly started. He just would reach up and scratch a little. He would do that to walls too! He had little claws, so it was really cute.

- He was my bathroom buddy. Every morning he would stay in the bathroom with me as I would get ready. Probably because I would give him water out of the faucet. He really liked that!

- Burney was a shy cat. Each time the doorbell rang, it didn't matter where he was, he would high tail it to our bedroom to get under the bed. Burney didn't care much for Halloween. He wanted to watch the people outside but then they would knock or ring the door bell and he'd go running! It was cute! 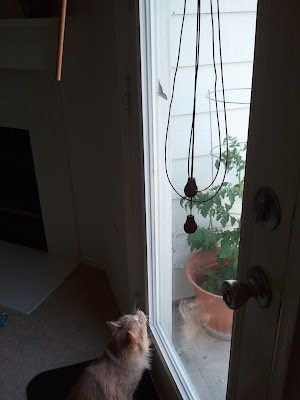 - Burney loved to wrestle with Yao and Nemo. With Yao, they would kick each others heads. It was so funny! Nemo, well he would just jump on top of Burney. Then Burney would play. 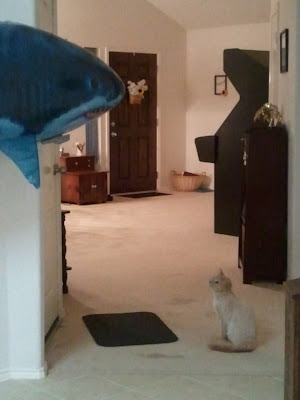 Burney was only 2 years old. He had some rough moments and some really great ones. If you don't know Burney's story of where he came from click here. I am still so happy and proud of Joey that he stopped and picked him up. 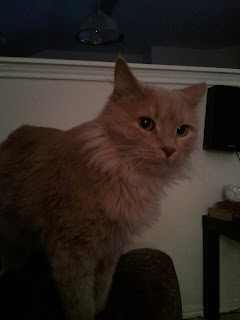 Burney really was an amazing cat. I am just so happy we got to spend these last couple of years taking care of him. He was a blessing on our little family.

Burney, our little lion, you are missed! We love you so much and you will always have a special place in our hearts! 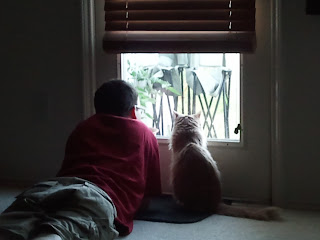 What a beautiful tribute to Burney. (((hugs)))

this made me cry! i'm so sad for your loss and that you had to make that decision.

how on earth did he jump onto those top cabinets? my cat chatters at the birds, too, and i'd never had a cat that did that before.

Cape:
Burney would get on top of the cabinets by a few steps. Jump on counter, then to top of fridge, then just a tiny jump to the cabinet tops. To get to the one in the picture, he had to jump (kinda far in my opinion) across the sink to the other cabinets that are hung by themselves! Oh I love the chatter noise! It was so cute! I am hoping our Nemo does it! :)