Homemade Applesauce and other Cooking Adventures 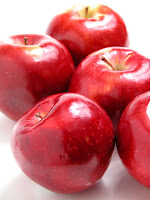 Today I thought I would try a recipe that I found on an organic blog. No my applesauce is not organic. I bought 2 lbs of normal apples for $1.00!

Since 10:30 this morning I have been preparing the apples (peeling, coring and slicing them in quarters), and then about 20 minutes later I had them cooking. I was excited to try this recipe since you cooked it in the crockpot! I only have one other recipe for the crockpot, so I was excited!

I added cinnamon and other spices, it made our house smell SO good! :) I just got done mashing the last of the apples and now we have applesauce!! :D

I am so excited! It's a little bit chunkier than Motts, but I made it myself, from the apples I picked and prepared, so I am happy with it, no matter how weird/gross it looks! hehe

Earlier this week (on Monday) I made Baked Ziti! Just in case you don't know what that is, it's almost like lasagna, but with these type of noodles:
I think they are called ziti noodles, even though the box said something different. 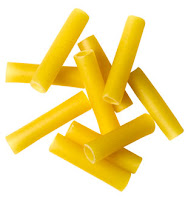 Instead of making my own spaghetti sauce, I used the Traditional Ragu, then added Rosemary, Thyme, Oregano, Margarine(the spice not the butter), and pepper. The sauce turned out SO well! That was my first time using spices like that! So that encouraged me to try more with spices! I added my already browned hamburger meat, which I had frozen and simmered it. The meal turned out awesome!!

I'm on a roll! :D It's been a while since I made a meal that was gross. lol

I still have the Chicken Spaghetti mix frozen, for an easy meal. All I have to do is boil and add noodles to it. I LOVE that!

One of the blogs I check often for coupon, sales, and deals talked about freezing meals. (http://www.moneysavingmom.com/money_saving_mom/2009/11/freezer-cooking-day-the-final-results-and-come-link-up-your-posts-too.html) She actually spends one whole day preparing, making and then freezing meals for the whole next month!! She says it helps her save money, by buying in bulk and actually using what she buys, and it also keeps her family from eating out. She also gets to spend more time with her son by doing this! Another thing is even though she spends 8 hours that day in the kitchen, that is much less time if she totals the hours she would have to be in the kitchen each night preparing the meal!

I can't be that extreme...for one, our freezer is too small for that and two I don't have that kind of time right now. But I love the fact that all she has to do is take a meal out, thaw it, and cook it! So that is something I want to work on! Preparing and freezing at least one meal a week if not more!
Posted by Rachel at 4:38 PM