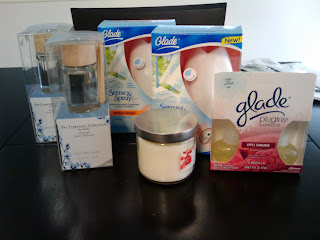 As I was checking ads on Sunday, I decided to look at Walgreens' ad. I have read on many of my money saving blogs that Walgreens runs good deals. So I decided to check on what they had.

Well I stumbled upon 2 great deals!
- One deal they had was the 2 pack of Glade Oil Refills and The new Glade Home Fragrance (I think that's what they are called, it's the new fancy Glade stuff) candles (the 4.9 oz size) were on sale for 3.99. At the register you would get a coupon for a $1.00 your next purchase. So it was like it was $2.99.
- The next deal I found was Glade Sense and Spray, Glade Home Fragrance Reed Diffuser, Glade Lasting Impressions (where it holds 2 oils and alternates the scent), and the 3 Wick candle of that new Glade line were $4.99.

Here is what I got:

No I did not pay those prices, those are the normal not on sale price of each of those items!!

So now my house smells nice, and I have 2-3 Christmas gifts! :D

That was my last deal hunting for this week. Man, saving money can get addicting! So be careful and don't forget Who it is that allows you to earn that money and then allows you to find the good deals! I think it is such a blessing that I went to that coupon class!  I feel like I am being a better shopper and being more wise with the money Joey makes.

Have a great night everyone! :)