Hi Everyone!
We didn’t do much today. We relaxed today since we were still really tired from Grand Cayman.
We woke up and saw Cozumel in the distance, we were set to arrive there at 10am and Joey being used to work still wakes up at 7…then hw wakes me up :) We got into to dock, I finally got out of bed and we ate breakfast.
While eating breakfast we noticed that another Carnival ship was docked right next to us! It was a lil newer than ours and their theme of the ship was super heroes, I think Joey said. Our ship’s theme is Impressionists; so it has a lot of art on board. So while we ate breakfast we watched the people. It was funny because afterwards we went on the top deck and their announcements would happen and we couldn’t tell what ship it was!! lol The only difference is our announcer guy always says “Top of the morning to ya!” hehe
We soon after that went off the ship. We walked around the shops and I did some shopping while Joey watched :) The ship had given us a guide of different shops so I previously looked and picked some to visit. The first shop we went into was Del Sol.They have a lot of stuff that changes color with the sun! I got some neat hair clips there. It was really warm today! Luckily the shops were air conditioned!
One shop had a person outside that when he stood still you thought it was just a statue. He creeped me out! I didn’t want to go near him just in case he was one of those mean people that would jump at you,but he wasn’t. I took a picture of him so you can see him.
We went in a few more shops and I got 2 more things. That was about it. By that time we were getting hungry/tired/thirsty. So we went back on board. Got lunch, and took a long nap.
We take naps a lot! The sun and heat wears you out so fast! We then hung out until the shops opened on board, since I wanted to go to them. (The ship has to be so far until they can open the stores)
That was really our day. Nice and relaxing and not too eventful! :) I was REALLY excited when we saw our towel animal tonight though…I took a picture so you can see! It was one of my favorite animals! :D I really enjoyed Grand Cayman and Cozumel more than Jamaica. Just cleaner and prettier I think! Tomorrow is our day at sea, then we will be back in Galveston! I am excited about being back home, yet then I go back to school and life resumes, but it’s exciting to be able to tell my friends at school about everything that happened over the break! I have had a lot of fun on this cruise! And as Mary said I will weigh myself when I get back :)
Ok picture time!
View of Cozumel from the boat 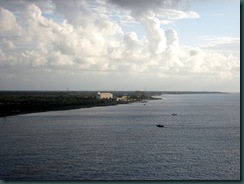 The other Carnival ship- The Valor 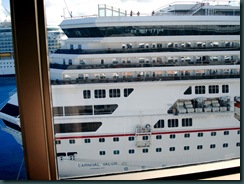 Double tale! (Ours on the left and the other on the right) 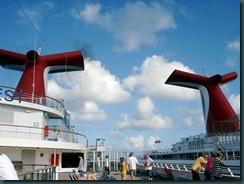 Here you can see the difference of the depths of the water! 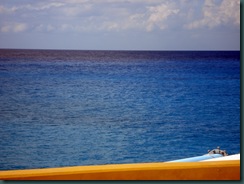 I thought the name was funny! 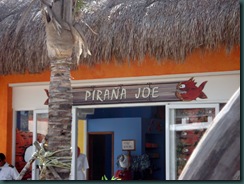 Here is the creepy pirate. You can tell it’s a person bc of the right eye, it would move. 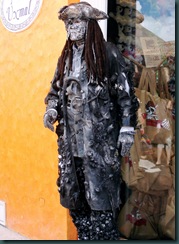 Joey took this while we were walking back to the ship. Ours is the one in the back. The Valor is the ship in the front. 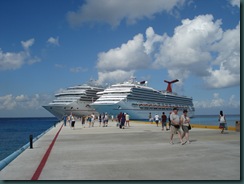 Our on the left, the other on the right. A neat picture Joey took :) 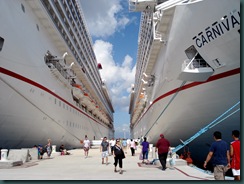 You could see straight down! The water was so beautiful and clear! 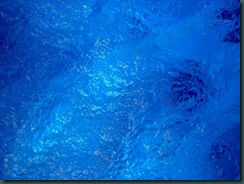 Oh…I took a picture of this bench bc I though it was really cute! (It’s a cow!) 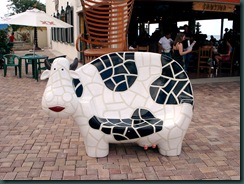 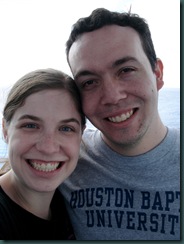 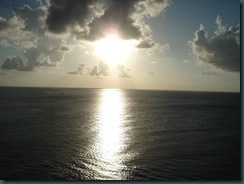 Cozumel just before we pulled out of port. 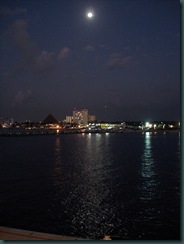 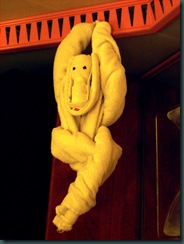 That’s all for now! I will post tomorrow whatever we do! I just checked the ship’s channel and saw where our ship is and it is already 103 miles from Cozumel, but still 600+ to go!
Have a great day! :)
Posted by Rachel at 11:16 PM