Hi :)
Well this post will have a little of day 1 night, since I made the blog earlier yesterday!
Last night went to a show. It was a unique show. lol There was singing and dancing, it was fun to watch though! It was about a guy and a girl meeting over the internet. Like You’ve Got Mail sort of thing. The singing was really good!
After we left the show, we were walking around and there was a band in the casino playing swing music! There was also people swing dancing!! It was so cool to watch!! :D After watching them, I really wanted to learn how to swing dance!! Sadly I didn’t get any pictures. But it was dark and I would have had to use a flash on my camera…probably would have blinded one of the dancers! lol
Last night was formal night for dinner, however we decided not to go; we looked at the menu and it wasn’t really worth dressing up for we thought. So we decided to go to the buffet, it had some of the same food! So we had good food w/o the dressing up part! lol
OH! Yesterday they had a Hairy Chest Contest! We didn’t attend it, but luckily they replayed it on TV…YUCK! There were some really big guys without shirts lol
Day 2 (so far as of 12:05)
We are now an hour ahead on the ship…the ship changed its time last night.
So far today we have gone to breakfast, which was really yummy, and that’s about it! We plan on going to an Art Auction about 1pm (12pm normally). They are going to be showing the art they have on board, and a “FREE ART GIVEAWAY!” lol
Tonight is “The Deck Party”…there is to be music and dancing.  Tonight’s show is Motown Sounds of Ron Joseph too. Just thought I would throw that info in there :)
One thing that is popular on board is BINGO! We went to the show early and it was still going on…those people were getting really into it!! I’m not sure what the prizes were, but it definitely wasn’t like the old people bingo!
Alright some more pictures!!
This was the sun going down last night. 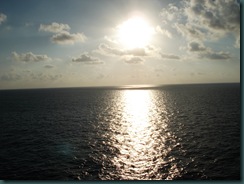 Here is the sunset! 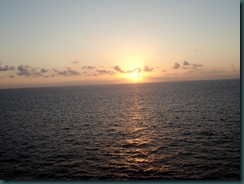 When we got back from dinner this lil guy was on our bed! 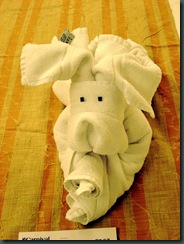 They have a board that tells us where we are…this is the where we are today…as of 11:10.
(If you look really close you can see orange dots, those are our destinations!) We went by Cuba early this morning! 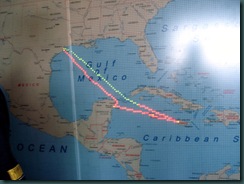 This is the deck where most of the entertainment is. The light fixtures are flowers! It looks so pretty!! 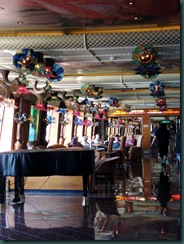 A close up of one flower fixture 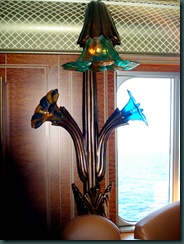 This is the ceiling in the same place with all the flower fixtures. There are different pictures painted on the ceiling :) 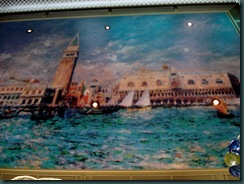 This was about 40 minutes ago…the sun is SO beautiful hitting that blue water! 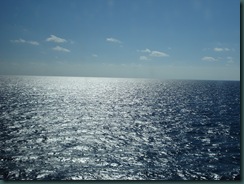 I will try to post a lil later more pictures of what we go and do :) We are to be in Jamaica tomorrow morning!
Have a great day!!
Posted by Rachel at 11:04 AM