Hi Everyone! :)
Today was an adventure! Joey woke me up this morning and Jamaica was right outside! First looking at the island it is beautiful! There are mountains covered with trees and the water is pretty and blue!
We went and ate breakfast, then we went off the ship. Carnival had a Jamaican man there as you get of board for pictures. We went to the terminal and then boarded a bus. One of the first things Joey pointed out was that they drive on the opposite sides we do!
Our trip to the Appleton Estate Rum Factory was very scenic. However…it was VERY bumpy and all the roads we were on were through mountains, meaning winding roads!! Also the ride to get there was TWO HOURS!! It was sad, Joey and I survived 2 days on the boat, but give us an hour in a bus in Jamaica and we were about to “toss our cookies” lol Our driver was drove fast around those mountain roads…I am now more appreciative of the guardrails the US has on curves. I was so scared that he would get too close!!
We got to Appleton, finally lol, and we went inside to receive a cup of “Rum Punch” I learned that I do not like straight rum. We went and took a tour, they showed us how they used to press the sugar out of sugarcane. They had  a donkey there to show us. I felt a lil bad for the donkey since his whole purpose there was to demonstrate that to us. He got to eat the sugarcane husk/shell though, so he was happy :)
They took us into the distillery, and then the place where they keep the rum in the barrels to age.  They keep the rum there a minimum of 3 years, so they had barrels made in 2004-2005 in the front to show us.
After that we went and sampled pressed sugarcane juice, it was VERY sweet. Not too good by itself! Then they let us try molasses.  I didn’t try it though lol  It was then time for lunch, yes they provided a lunch for us :) However we were afraid of getting sick on the way back so we didn’t eat he meal. But there was a lady passing out rum cake, and we both had a piece…it was soo good!!  Then the tour people had more of the different kinds of rum they made for the people to try. I tried a coconut rum. Sounds good, but it wasn’t! lol Joey tried a creamy rum, he liked his. We didn’t buy any though.
We had a long 2 hour ride back. It was a different route though, so different things to look at with the windy, bumpy roads! We were happy to get back on the boat. :)
Tonight the show was a magician and the Carnival dancers. They were good.  I’m not a very good audience in the magic shows though bc I always want to know how they do it! :)
Then dinner, tonight we had delicious pork chops! They were so thick! We ordered desert.  The waiters/waitresses then came out with a piece of the cake desert and sang “Happy Honeymoon”!! They would sing “Happy Honeymoon to you…kissy kissy kissy” LOL This all with Asian accents which just made it better! :D It was so sweet! We have such a nice waitress, she memorized her card about us, so she calls us by our name and asks when we will be back :)
Then right before we were about to leave “the show”started in the dinning room! (We have missed this before since we would just eat and leave) Music started playing and they asked everyone to get up and dance w/ them! The wait staff started dancing to the music! I think the song was the electric slide, but I’m not sure :) It was awesome though. One waiter had a Jamaican hat on w/ reds on it, and then another tied a napkin on his head to be like a bandana :)
After that we walked by the casino and there was more swing dancing!! :D We stopped and watched, this time I did get a picture!! We talked to one of the guys and found out that he is the swing dance teacher!! He has been teaching swing for 14 years! I think he is teaching classes on board then some of the people dancing are his students! He asked us if we wanted to learn, so he showed me the dance moves and I would show Joey the moves! He taught me how to do some spins, but I didn’t get to practice that much. It was SO much fun! :D
Alright enough text…picture time!
Sorry in advance, some of these were taken from inside the zooming van!
1st view of Jamaica from the ship 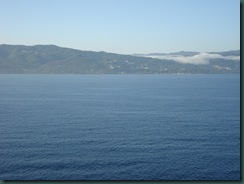 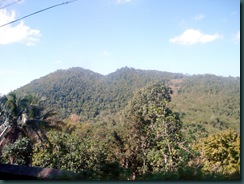 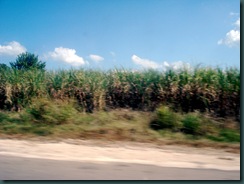 Washing machines and dryers are few and far in between, so these women are washing their clothes in the river and then have spread it out on the grass to dry. 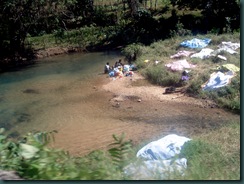 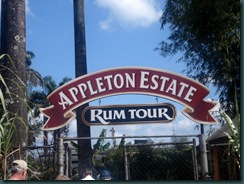 They had peacocks at Appleton!! 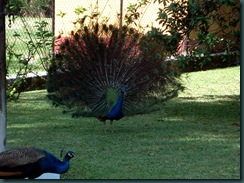 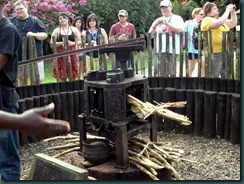 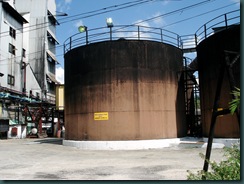 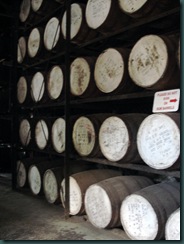 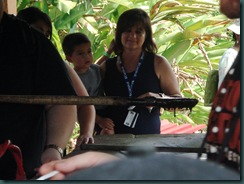 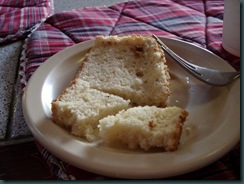 These are flowers that were around Appleton 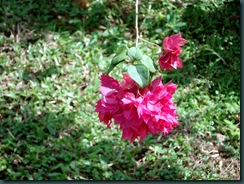 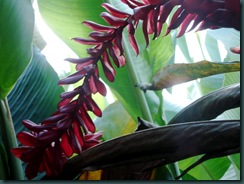 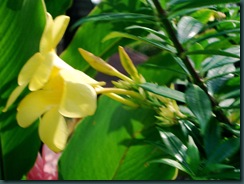 As we drove back the schools were out, so the children were walking back home. Each time they saw the tour bus they would wave :) The children wear special uniforms to school, the color depends on the school they attend. 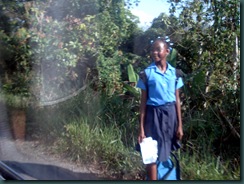 I have more but I will make another post of just pictures :)
Stay tuned…
Posted by Rachel at 10:58 PM