Wow, sorry it has taken me a while to write about the last day!! I've been super tired lately.

Friday was a good day. It started out a little hectic though. Before I was awake, at about 9:15, Joey found out that we were to check out at noon! Our flight didn't leave until midnight! Ack! I was just imagining us wheeling our luggage around with us the whole day.

So I got up, got ready, and we scrambled to get everything packed up. By 10:30 we were ready to check out. The awesome thing was Joey found out that the Bell Hop offered to hold our luggage until that night! What a blessing! :D So everything turned out well with the noon checkout after-all! :)

Once we checked out, we walked across the street (it's a farther walk than you think....walk through the Wynn, up to the bridge that crosses the street and down) to the Starbucks. I figured out on Thurs. that they have an amazing fruit cup! :D We got there and ate.

After we ate, we decided to see what shows the discount ticket place had, that was located across from Starbucks. We discovered that they had Blue Man Group tickets!! :D So we waited in line and bought tickets for the show that night! :)

After we ate, we decided to go back to the pawn shop where they film Pawn Stars, to try to see if we could go inside. We got there and there was a line!! lol A line for a pawn shop! I felt kinda sad for the EZ Pawn a lil ways down the street...no one was there! I think only 1 person in line had something to sell...the rest wanted to just see the shop. We didn't stand in line too long. We got inside and the pawn shop is not that big. Joey and I walked around and looked at the stuff. Guess who we saw!! :D We saw the Old Man! :) He was sittin' behind his computer...just like on the show! lol I couldn't get a picture bc he was where the register was, pictures weren't allowed.


After that we decided to go see the hotels we haven't seen yet, Excalibur, New York New York. Plus there was an M&M World I wanted to go to down that way.

We went to M&M World, it was super crowded! Then they had a Coca-cola store...it was over-priced lol There were neat things in each store though. We went next door to the MGM. 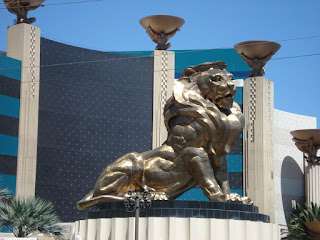 Joey had heard of a place there called Television City. So we walked around to find it. Television City is where CBS pre-screens their shows. It is totally free!! You sit and rate the show, it can be a totally new show (not on the air) or one that they already have on the air. You rate it as you watch.

Well.....we got such a BORING show to watch!! lol First of all, it was set in England...which I didn't like. Nothing against English people, but I felt detached from the characters. Then they had this really gross relationship with a 30 year old with a 70ish old. UCK! It wasn't all bad...some points were interesting. However depending on how we rated it, it might never show, might get revamped, or they might just run it anyway! lol

It was such a neat experience though, so I recommend it. You have to be at least 18 years old. Plus it is FREE! Free entertainment! :)

After Television City, we rushed to the Blue Man Group show. OH MY GOSH, it was SOOO fun! One point during the show I caught myself giggling like a little girl! :) I highly recommend this show! It is audience-involved...so if you just want to sit and stare...don't go. They walk in the audience, pull people up on stage...and whatever you do...don't be late!! We had people come in late and they shined a light on them and put their image up on the big screen. It was funny! Here's the band: 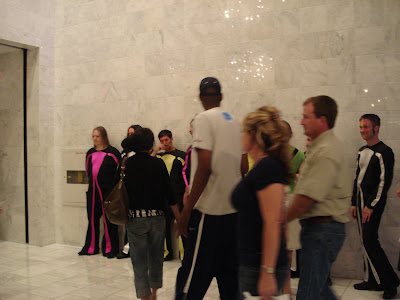 The people in the black suits...people didn't know they were there so they kept walking.
After the Blue Man Group we almost literally ran to the Bellagio. We wanted to catch the fountain show at night. We almost, almost made it and it started. Both of our legs hurt from walking so fast, but it was fun! Sounds weird, but it was :)
So we decided to hang out in the Bellagio till the next show(10pm...an hour wait) We saw the next one. It was beautiful!!! 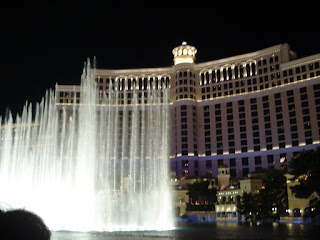 Then while we were walking back, they did another show at 10:15! LOL I think on the weekends they do a show every 15 minutes!
We walked all the way back to the Mirage, took the tram to Treasure Island...then walked to our hotel to get our luggage.
While walking back, my leg started burning!! Like really burning! I get a heat rash on my legs when I get hot (during the summer usually). Plus my leg was swollen. By the time we were back to Encore, I was almost crying I was in so much pain. By the time we got to the airport I could barely walk. So my awesome, amazing husband pushed me in the wheel chair to our terminal. I took off my shoes and that seemed to help. Once we were in Houston, I could walk.  Don't worry I am all better now. I think my leg just missed Houston! :)
We had such a great time in Vegas!! :) I hoped you enjoyed reading about our adventure!
Posted by Rachel at 4:17 PM