So this past week, on Tuesday, we went to go see Seventh Day Slumber at Kemah! KSBJ put on a concert to kick-off a new radio station of more rocking Christian music (I'm excited) that will come I think this August or fall.

Joey and I took 2 girls from the youth group and his sister.

It was a lot of fun!

Only complaint: IT WAS SOO HOT!!

We stood in the front(ish) in the crowd and that made it hotter...thankfully God provided a breeze that would blow every once and a while that felt like AC :)

I failed at taking good pictures, but I did take a few.

If you don't know who Seventh Day Slumber is, here's one of their songs:
"Surrender"
http://www.youtube.com/watch?v=VuTdeMng_co

They are a  rockin' Christian band. :)

They sing:
Surrender
From the Inside Out
and others 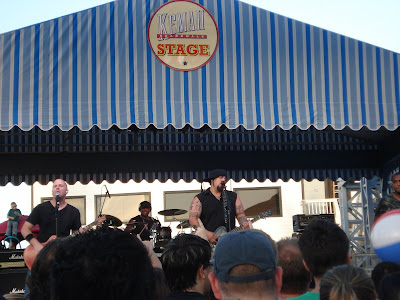 I had to make the picture bigger, otherwise it was hard to see and you can't really see the bass player on the right. In the original pic I only got half of him! Poor guy!
P.S. Check out the boy jamming on the playground slide roof :D (to the left) It was awesome!

The lead singer told us his testimony, it was amazing! It's so amazing to hear what God can do!

He grew up in a house where his dad abused his mom, he became addicted to cocaine by age 14, became a 4 time convicted felon by the age of 22 and tried to commit suicide twice. The second time he took a lethal dose of cocaine, his mother came home early and she walked in on him as his heart stopped and called the ambulance. It was in the ambulance that he gave his life to God.
You can listen to all of the story here:
http://www.tangle.com/view_video?viewkey=7839d1baac6aea8357e7
(The volume is kinda low, might just be my laptop though)

It is amazing! One thing I love about this band is the lead singer and his tattoos. It shows that even though someone may have tattoos and look "rough", they can be a person who's heart is after God! He is the one who really matters and it is your heart that He really looks at.